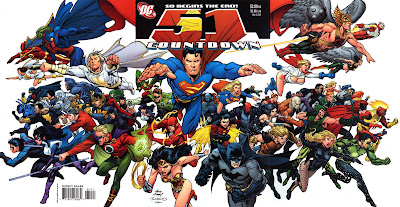 Following the success of DC's Fifty-Two weekly series, they released a series called Countdown immediately after Fifty-Two concluded. Countdown was also a weekly series used as a precursor towards the big summer crossover event called Final Crisis which would take place the following year (2008). I'm learning to love DC more and more with each passing series, at least as far as crossovers go. But with Countdown, I think they went to the well one too many times.

Much like Fifty-Two, in Countdown, several different stories carry on simultaneously, giving us a perspective of the DC Universe. The story arcs ranged from zany (you had Jimmy Olsen become akin to a God... really, Jimmy) to useless (Harley Quinn, from the Batman series, joining the amazons) to boring (the story of the Monitors). With so many storylines, you'd think that at least one would stand out as being awesome, alas, none were found. On top of that, with so many convoluted subplots, the main story arc felt lost amidst the series. Without a clear central focus, the motivation seemed lacking across the board.

Most of why I enjoyed Fifty-Two was that they introduced and developed characters well, and it helped me understand their motives or at least gave insight behind who they were as characters. If, for example, I forgot specifically what they were doing plot-wise, at least I understood where they were coming from. In Countdown, I felt the exact opposite. I was introduced to a plethora of characters, but because of the lack of development, I found myself not caring what they were doing and often times, forgot totally what or why they were doing things at all.

Critics and fans alike decried the series for being a mess. Even the monkeys working at DC conceded that it went awry compared to Fifty-Two. Still, sales were well despite the negative feedback.

While reading the series, I often wanted to give up on it, but I gave it chance after chance, hoping that it would become better. Ultimately, I wanted to read Final Crisis and felt I had an obligation to read this series beforehand. But apparently it doesn't matter much. We'll see. Stray away, save your money. That is all for today. Later geeks!