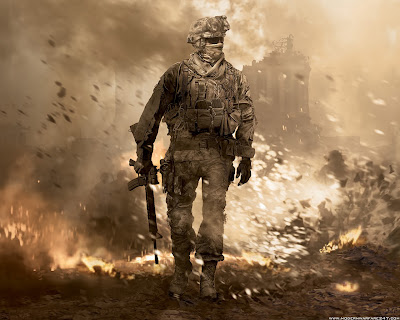 Instead of doing the normal review for Modern Warfare 2, I thought I'd just post an email I sent to my friend Matt instead. It pretty much summarizes my feelings. I will add a few notes though. It's pretty much the same game as Call of Duty 4: Modern Warfare, with a slight facelift and some new weapons. That's not a bad thing at all considering the first game was pretty effin' awesome. The most noticeable thing to me about the campaign was how much easier it was than the first one. There's not that same sense of urgency that you feel from the first game (remember all those missions that were like "you've got 10 minutes to finish this mission"?) which really allows you to pace yourself. Basically, if you've got a lot of patience, the whole campaign even on its hardest mode, will be a cake walk. So yes, I wasn't frustrated clearing the game on veteran mode as I was with the first game. Aside from that, I love coop gaming, and they did justice with the Spec Ops mode which is best played in tandem with a friend. Anyhow, the email is below. Later geeks!

The email was titled: "Call of Duty: A Self-Assessment"

So I've played a bunch of Call of Duty the past few weeks, and I've come to realize a few things and conclude a few others. As a fellow CoD player, I thought you might be able to relate in some ways.

The Kills
I think I've settled on the fact that I'm a 0.5 kpd kind of player. The highest I've seen it go was up to a 0.54 but it's always made it's way back down. And that's fine. One kill for every two deaths, I'd like to think that I make the best with each of my kills. There was a few days where the kpd was closer to 1 kpd during those sessions, but never amounted to much overall I suppose. The interesting thing is that in some games I'll do pretty wicked (as per my standards) and end up something like 23-19 (which was my best to date), or relatively closer to the 1 kpd. While in other games, I'll just get slaughtered, with something like 4-28. So I find that either I'm even, or I get totally obliterated, but it never goes the other way. It's never a 28-4 game. Which is okay because of the following point.

The Objectives
Probably two weeks ago I played the Demolition game for the first time. I was getting so much more xp because of the max 3 rounds and possibly 2500+ xp per win per round. Adding in the kills and objectives, I'd nail around 6000-8000 xp total per game. So with this, even though I realized that I'm a bad shooter/killer, I'm good at completing objectives. In these games, I frequently get the accolades of Most Bombs Planted, Most Targets Destroyed or Most Bombs Defused. So that's what I always do, head straight to the objectives, and worry about the killing after. It works best when my teammates are good shooters so they can take care of the enemy while I go directly for the objective. But sometimes it can be frustrating when it seems like the teammates don't want to do the objectives and would rather kill stuff. I mean, why not join a team death match for that?

The Maps
For the most part I like all the maps. But I don't love any of them, whereas I did in the first Modern Warfare. Probably the closest one to love is Derailed (the snowish type one) but only probably because it's easier for me to camp and pick off kills, whereas other maps I can't camp. That said, I think I hate the Estate map. I find it's hard for me to see enemies on that map based on the colour scheme outside and plus the varying elevations don't help much either. Anytime I get logged into an Estate game, I just quit.

The Weapons
After maxing out the challenges on the SCAR, I decided to try a different weapon in order to do their challenges and gain more xp. I'm a new fan of the Aug light machine gun. It doesn't feel as powerful as the SCAR, but I find my accuracy is improved with it. And plus, I like the larger magazine size. I do end up spraying a lot, so my magazines run out quick. Also on the weapons note, I've decided that I can't use the Heartbeat Sensor anymore, and I think I told you a bit why before. I found that I was dying a lot when I was using it because I was juggling between looking at the screen, looking at the map radar, and looking at the Heartbeat sensor. Too many things to focus on and I'd end up dying more often than it helps. So I've taken that off and usually add the Holographic Scope and if I'm using the Bling perk I'll add the FMJ.

Anyhow, that's all, it was a long email, but I had a lot on my mind in terms of CoD. We need to do Ops again soon, I'm hankering for those achievements!

Have a good day, blessings,

Kevin said…
"Have a good day, blessings," seems so juxtaposed with all the mw2 talk LOL.