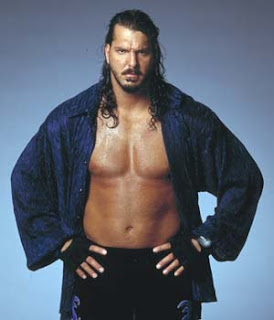 This past weekend, the body of former WCW, WWE/F wrestler Chris Kanyon, 40, was found dead in his apartment in Queens, New York. The cause of death was presumed to be suicide from an overdose of medication. Another premature death of a wrestler, it's a common occurence these days.

I first saw Chris when he performed as a masked wrestler named Mortis in WCW. He would eventually unmask and become known as Kanyon. In-ring wise, he was an entertaining wreslter to watch; a really solid worker, coming up with unique spots all the time. Arguably, the peak of his career was in a storyline where he, Diamond Dallas Page and Bam Bam Bigelow (also deceased) formed a stable dubbed "The Jersey Triad", who though a trio, were allowed to perform as a tag team, giving them an advantage over other two-man teams.

When WCW folded earlier in the decade, he was picked up by WWE when they scooped up the defunct company. Still in his early 30s, Kanyon would eventually fade into obscurity amongst the myriad of wrestlers working in the company.

In a way, I do have to thank Kanyon. There was a night when I was in grade 10 where I couldn't fall asleep and I found myself scanning the AM radio for something interesting to listen to. This was at 1:30 in the morning. I stumbled across the Fan 590, a Toronto radio station dedicated to sports, who were broadcasting the LAW (Live Audio Wrestling), a 2 hour radio show that was dedicated to prowrestling. I had never heard or known of the show until that night. It just so happened that they had Kanyon on as a guest and if I didn't hear his voice, I would have just kept on scanning channels. He helped me to discover the LAW, a show that I still listen to today. So in that sense, thanks Chris.

Yesterday afternoon, I was thinking about his death and about the deaths of other wrestlers as well. Sometimes being a hardcore wrestling fan can bring so much joy but it seems to equally bring times of sadness. It does suck being a wrestling fan sometimes. It sucks to hear whenever some of your favourite wrestlers die. I can remember very vividly the past 2 times I've cried. That second last time was when I found out Chris Benoit died... but before I found out he murdered his family and killed himself. Before the chaos, Benoit was my favourite.

I don't know of any other sports or entertainment outlets where a large percentage of its performers die at such a young age. The sad thing is that it's hardly ever natural causes; most of them are from either health abnormalities or suicide. If you want to see something frightening, look at the list compiled on About.com found (here). It's astounding. Wrestling fans on the F4W board were talking about it over the weekend and a lot say that they've become desensitized to it because it happens so often. I can't quite agree but I do understand where they're coming from.

It is unfortunate that wrestling is such a cosmetic business. As soon as you pass the age of 35, your days of being in the national spotlight become numbered. Not many wrestlers have the benefit of a formal education, having being trained and working at young ages. So as soon as they're out of that limelight, they practically become nobodys. Some take bookings in the independent circuits working for only a fraction of what they were making while on the national stage. Others get out of the business and are relegated to menial jobs because of the lack of post-secondary education. But they all have that drive inside of themselves to try to get back at that national level. The problem with that is that there is basically only one outlet for that.

WWE as the only major company basically dictating the business compounds to the problem. Yes, there's TNA and yes, there's ROH, but at a national and even global scale, they are but ants to the wolf that WWE is. So basically whether you're a star or not is all in their hands. But as I mentioned before, many of the stars from the past still hope to get back at that national level. You can see for yourself. If you were a fan in the 80s, just do a search on Google to see where they're at. I'm guessing you're most likely going to find one of two things; they're either dead or still working in the independent circa. Or you can tune into TNA Wrestling. Their roster is filled with faded stars trying to ignite themselves to become superstars again. It is sad seeing a bunch of grey haired and fat old men risking bodily harm just to try and get that spark going.

It would be so much better if the industry had more competitors or more outlets so that wrestlers who can't or at least shouldn't wrestle, can still have a stable job that's related to the industry. Jobs like coaches, trainers, road agents, on-air personalities; basically jobs that would keep them in the scene but without putting themselves in harms way, mentally or physically. Much like Chris Kanyon, wrestlers bout with depression and a lot of times, it takes the best of them. It's always easy to dream, but it's never easy to become a faded dream.