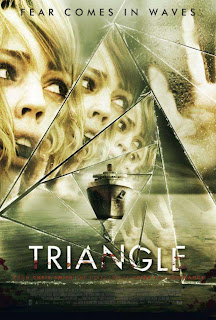 The plot as summarized on IMDB:

"The story revolves around the passengers of a yachting trip in the Atlantic Ocean who, when struck by mysterious weather conditions, jump to another ship only to experience greater havoc on the open seas."

When I first read that blurb before queuing up The Triangle, I was hesitant to continue because of the ho-hum sounding plot. All I was thinking was, "oh boy, another one... another one to snooze through". Imagine my surprise.

What they do with the story is what makes the movie so captivating. At the core is a mystery that has its layers peeled off slowly, unearthing new elements as the movie progresses. Soon we find elements of thriller, sci-fi and horror... it becomes contrived but never TOO contrived. Without getting too much into the spoiler territory they play around a lot with the whole space-time continuum and try a few things that you don't see much in mainstream films. Even on a limited budget, they were able to create some truly frightening and terrifying imagery. I watched the movie a month ago and yet one of the scenes still haunts me in the back of my head.

The movie stars Melissa George who used to be in commercial movies but I guess is slowly fading into obscurity. She does quite a good job as the lead here all things considered. The movie was helmed by Christoher Smith who also did the cult favourite, Severance. I watched that a few years ago and as I recall, I liked it up until the third act. I thought that this was a much better movie that held itself together due to the better story.

I've been pretty happy with my DTV experiences lately. For the most part, they've ranged from decent to good... no titles really getting my blood boiling. This is another title that I haven't fallen asleep to, so it seems I'm on a roll! Later geeks!

(Inserted below is the trailer but I find it's a bit spoilerish, so I'd avoid it if it's the type of movie that you'd consider.)

Slapinions said…
Ok, based soley on your review I hunted this down at a local Redbox (their website said it was @ several Milwaukee locations, but they're on crack. It was never where they said it was).

Anyhow, it was creepy, and a damn good way to spend 90 minutes. Thanks for the tip.

On to searching for Descent 2 (haven't read your review of it yet, just saw it leading off your blog).