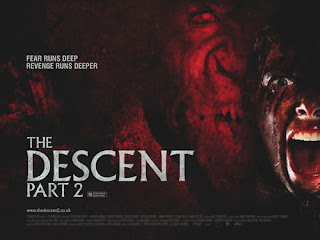 Well as they say, if it ain't broken, don't fix it. That seemed to be the approach that the director adopted in making The Descent Part 2. The first movie quickly became a cult favourite when it was first released. Combined with the horror and eeriness of the caves was this deep sense of claustrophobia that really helped in creating a terrifying experience. As the girls were trapped, you felt trapped too; the perfect way to elicit fear to the viewers of a horror movie. I really loved the first movie and actually never even realized they were working on a sequel until it came out.

The movie picks up exactly two days after the first one ended. The only known survivor, Sarah, is taken and kept at a hospital after a local discovers her wounded body. The sheriff, fearing that there could be more survivors in the caves and that Sarah could be the killer, quickly assembles a team to head under and investigate the cave. They take Sarah down with them as the sheriff suspects that she knows more than she's revealing. Unbeknownst to the sheriff and his crew, the caves are still full of the cannibalistic dwellers that devoured Sarah's companions.

There's a few twists thrown along the way; most are welcomed but there is one glaringly stupid twist that they throw in that almost ruined the whole experience for me. I'm not going to spoil what it is but it happens at the very end. Before the last 24 frames, this movie was a surefire thumbs up movie but those last frames became my lasting impression and it soured me so much that I lowered it to a thumbs in the middle.

Anyhow, if we can ignore those last few seconds, then this would of been a pretty great movie. It's almost exactly the same as the first Descent, so it's neither better or worse. There's still the same atmosphere, same dwellers and like it or hate it, that same sense of claustrophobia.

They did up the gore factor in this movie, so expect more edgier blood and guts than from the first. They also have probably one of the grossest things I've seen in recent cinema that just had be groaning out loud. Just to give you an idea, it involves the cave dwellers shit.

Director Jon Harris helmed this feature and I do give him credit for getting it (mostly) right. He captures the same feelings and emotions that Neil Marshall did with the first one, so I'd have to consider this movie (mostly) a success. I just really wish he didn't go with the ending that he did.

I say check it out if you can. If you can somehow not watch the ending, I think you'll be better for it. Til next time, later geeks!