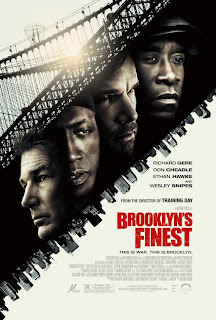 Let me tell you a little story about me and Brooklyn. When I was younger, our family used to drive down to New York almost on a yearly basis. You see, half of my relatives (pretty much the complete side of my mom's family) resided in New York, with most of them living in Brooklyn. I don't know why, but when I was a kid, I always feared Brooklyn. I always thought of Brooklyn as this dominion for gangs, drug dealings and general debaucherous activities alike. I guess it was because of the way that TV shows and cartoons would depict it. It wasn't until the past two years that I've changed my views on this borough. Well, at least it was no more shadier than the ghetto neighbourhoods of Toronto. Which is connected to why I didn't think this movie was fair, even though it was enjoyable.

Brooklyn's Finest is director Antoine Fuqua's return to the police drama genre since the highly acclaimed Training Day which earned Denzel Washington an Oscar. Since then, he's pretty much done crap except for Shooter which was descent at best but definitely was not at the calibur of Training Day. The movie finds some success but it is not without some failures.

Brooklyn's Finest tells three stories from three different police officers working in Brooklyn, New York. Although the three stories take place at the same time, they aren't interweaving and in fact, the characters cross paths only a few times.

The first story focuses on an officer named Sal (Ethan Hawke) who descends further into corruption as the pressure in his family life increases. The second story is about Tango (Don Cheadle) who is an undercover officer deeply rooted with the black gangs of Brooklyn. His importance in this role increases but more and more, he finds the pressure too much and really just wants to get out despite the prodding by his department. The last story is about a veteran officer named Eddie (Richard Gere) who never really amounted to much even while serving decades as an officer. He's the type of person that goes through the motions but lacking the passion. He's a man jaded with life but finally finds a way to redeem himself.

What I enjoyed most was the acting of all the main players. Everyone's on top of their game. Wesley Snipes plays one of the gang leaders, and it's nice to see him on the silver screen again, instead of some DTV crapfest (although really, I wouldn't mind). I think of the three stories, I enjoyed Don Cheadle's the most. You really feel for his character as he's just a man who wants out, away from all the lying and double crossing but gets muscled back in.

The main problem I had with the movie was how grim the whole thing was. The way Fuqua depicts Brooklyn makes it seem as though it were the shithole of America. As I mentioned in the opening paragraph, Brooklyn isn't like this at all. The way he paints the city makes it seem so hopeless and worthless when in reality, it's quite a lively city or borough or whatever it is. If I were a resident of Brooklyn, I think I'd be pissed at this movie. Not only do they show the city in a bad light, but they also make it seem as though the policemen in the city are the worst people living there.

Watching this movie kind of reminded me of Requiem for a Dream. I've only watched that movie twice, but that second time, I only did it because I was forced to by one of my previous roommates. It's not that I didn't enjoy the movie (it's a great movie) but it's just that the first time around, I felt such an overwhelming feeling of sadness that I felt hardpressed to return to it for a second viewing. I kind of felt the same way with Brooklyn's Finest. The movie just made me feel sad the whole time and I don't know if I could watch it for a second time.

So if I had to decide, I'd give this movie a thumbs up, but only slightly up, perhaps at a 15 degree angle upwards. It's mostly enjoyable but it's not exactly an uplifting journey. Anyhow, have a great Easter weekend! Later geeks!