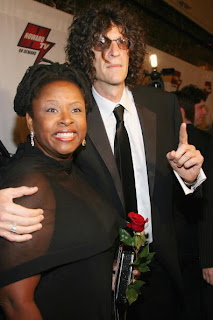 I started listening to Howard Stern Radio again these past few weeks. I used to listen to him everyday when he was still on terrestrial radio, but not so much when he moved to satellite, only because I didn't have access to it.

Anyhow, I was playing catch up and listening to Tuesday's show when Robin made a very thought provoking comment. I'm paraphrasing here, but she said, "Why is it that when people from ravaged countries come to America, they see nothing but opportunities? But the people who are born in America see nothing but obstacles?".

I'm mulling over this right now, it's such an interesting thought. Later geeks!

j-yeezy said…
Wow, that is a very interesting quote by Robin. Maybe people who come over to America are just more motivated to take advantage of any opportunity they can seize because they TRULY come from nothing. Americans and Canadians think they come from poverty, in the ghettos and stuff, people from other countries don't have no food stamps, no health insurance, no help from the government.Some North Americans rely on these handouts and get too lazy. Foreigners seem to have more drive. That's what we North Americans are. LAZY.
February 5, 2010 at 9:29 AM

The Lam said…
Good thoughts Jeff. I think I agree. And even worse, I do feel like I'm part of that second group, who sees the obstacles. I need God to unfog my vision sometimes.
February 5, 2010 at 11:50 AM