DTV Madness: The right side of THE WRONG SIDE OF TOWN!!! 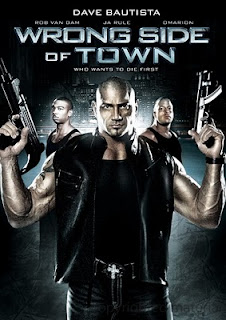 In case you didn't know, I love bad movies. I hate bad bad movies but I love bad movies. For me, it's difficult to create a scale to weigh out movies that I like or don't. For example, I love good big budget movies but I HATE bad big budget movies. Yet at the same time, I love low budget direct-to-video movies, which in a lot of cases are worst than bad big budget movies, but their lower budget gives them an endearing quality of sorts. Are you confused yet? Let's put it this way, if you're a bad movie but you went straight to video, there's a better chance that I enjoyed you more than if you had made it to the big screen.

Which brings me to The Wrong Side of Town (the name of the movie and not the place of course). This was a bad movie, but I found it wildly entertaining. I think a large part of it is because it stars two major wrestlers and as a hardcore wrestling fan, it behooves me to enjoy this tripe. The poster on the left is a bit misleading though. It places Batista (real name David Bautista) in the center of the poster, occupying the largest area, which wouldn't be a problem except for the fact that he was only in two scenes. In actuality, the star of the movie is Rob Van Dam (if you're not familiar with him, his name is a play on Jean-Claude Van Damme because of his similar looks... and similar acting chops after seeing this).

In this movie, RVD and his wife head out with some neighbours to a highscale club for some dinner, dancing and fun. At the club, his wife gets hit on by an addict of sorts and while defending her, RVD accidentally kills him... well, he sort of kills himself. Shit turns shittier as it turns out that the addict was actually the brother of the club owner/crime lord. The crime lord puts a bounty on RVD's head, triggering waves and waves of local hoodlums and thungs after our would-be hero. The movie then becomes an epic tale of survival for two couples stranded on... THE WRONG SIDE OF TOWN!

They had me right at the start of the movie. The opening credit sequence that they used was pretty much something plucked out of a James Bond movie. No, there's no famous singer doing the opening song, but there definitely is a song AND there definitely are silhouettes of females doing provocative dancing. Come to think of it, you don't see that in movies much anymore, not the dancing women, but the songs. I think adding songs with lyrics to any movie instantly makes it classier. 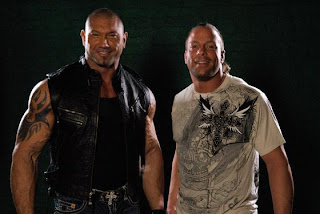 Meathead Batista and JCVD-lookalike, RVD.
The acting is what you'd expect out of wrestlers. For me, even though he wasn't the main star of the movie, Batista was the clear standout. His acting was not only better than RVD's but it was better than any wrestlers in those craptacular WWE produced movies. RVD is quite an acrobatic and aerial wrestler but his weakest quality was always his talking and promos. Even though his acting is clearly bad, they try to minimize it by focusing on his action instead. So what the movie lacked in the acting department they made up for in the bad-ass department in the hiring of noted thespian and Grammy-nominated artist, Ja Rule. Unfortunately for Ja, he was only in one scene, and I'm sure the budget was all it could afford. But they make the best with what they were given and I definitely laughed the loudest during his scene.

So friends, I'm not ashamed to say that I had a good time with this movie. It had action, it had wrestlers, hell, it had Ja Rule. What more can a mortal man ask for! Good times were had. Later geeks!