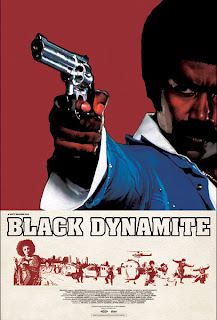 After watching this movie, it made me wish that I were a black guy in the 70s. Black Dynamite is a throwback to the blaxploitation movies that were popular back in the 70s. This was such a fantastic movie!

The story follows Black Dynamite as he tracks down his brother's killer. What at first appears as a low-level gangland crime becomes something more as Dynamite uncovers a giant conspiracy that leads him to none other than The Man. The movie is filled with kung-fu fighting, gun blazing action, car chases, foot chases, love-making and all that good stuff that you would expect from a blaxploitation flick.

Despite its limited budget, Black Dynamite succeeds in capturing the look and feel of the 70s. The clothes, the sets and all the music take a page right out of that decade. They even play on its low production value as in some scenes you'll see the boom mic dropping into the screen and Black Dynamite just looking at it. 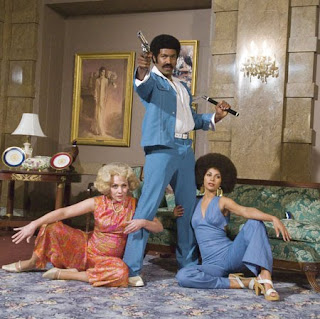 He kills the bad guys and gets the women.
Michael Jai White owns it as Black Dynamite and it's no wonder: he masterminded the script! At first it tricked me though. Before watching the movie, I watched its trailer on Youtube. They never mention Jai White, but call him by a pseudonym instead. I didn't realize it was a fake name, so the whole time I was watching, I was thinking, "he looks and sounds a lot like Michael Jai White". It wasn't until afterwards when I IMDB'd the movie that I learned of my foolishness. Black Dynamite, you've done it again! Bah!

It's out on DVD now and I implore you to check it out. If my words weren't enough to convince you, take a moment to absorb the wisdom of Black Dynamite. Hopefully that will convince you. Later geeks!

"Your knowledge of scientific biological transmogrification is only outmatched by your zest for kung-fu treachery!"

"Now Aunt Billy, how many times have I told you not to call here and interrupt my KUNG-FU!"

"Ain't nothin' in the world get Black Dynamite more mad than some jive ass sucka dealin' smack to the kids!"