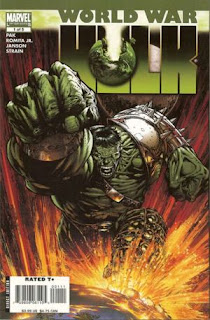 Released in the summer of 2007, World War Hulk is the big follow-up to 2006's Civil War by Marvel Comics. I should start off by saying that I thought Civil War was awesome. It took existing Marvel characters and did something new with them. I know the fanboy community didn't take to the story too well ("it was too emo" was a common argument), but I just liked that it was trying something new. It just so happened that when the series started that summer, I was living at residence at my school. A number of us started reading the series and it was great for conversation; it really made us think about what we would do in that situation. But I digress.

So even before talking about the story of World War Hulk, it's important to give some details in how we got there.
Years ago, the Hulk was involved in a rampage in Las Vegas that left 28 innocent people dead. An elite assemblage of heroes called The Illuminati (comprised of higher intellectual heroes ie. Professor X, Dr. Strange, Mr. Fantastic, etc.) decided that the world would be safer were the Hulk not in it. The Hulk was employed by S.H.I.E.L.D. to take down a destructive weapon orbitting in space called The Godseye. The Illuminati seized this opportunity to jettison him off to a distant planet thereby protecting the people of Earth.

World War Hulk tells the story of Hulk's return to earth. But he didn't come alone. You see, for years he was living on a barbaric alien planet called Sakaar, where he became a ruler they dubbed "The Worldbreaker". The Hulk with his newly found Sakaarian friends return to Earth to exact revenge on The Illuminati, not only for sending him off to space, but for sending a rocket that exploded and destroyed Sakaar. At least that's what he believed.

I guess my main gripe with the story is that it took five issues to move so little plot. And when the series finally ended, the resolution didn't seem worthy of the five issue read. I suppose it has to do a lot with my preference though. The Hulk comics are generally known as fight books in that they're more action based rather than story based. So what we get in WWH is a lot of fight sequences. If that's what you're looking for, I guess it's fine, but I just wanted something more meatier to chew on, something to make me think just like what Civil War did. There is a cool scene though where the Hulk and Co. turn Madison Square Garden into a battle arena, where he watched heroes duke it out for his entertainment.

I only read the series so I could be up to date in reading the proceeding crossover series, Secret Invasion, so I can't say I was really anticipating this one in the first place (probably why I read it 2 years later). The series is underwhelming and pretty much skippable. Til next time, later geeks!