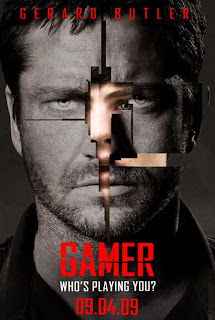 I mentioned in my review of Crank: High Voltage that the movie was a product of our video game saturated generation. It was just as spastic, flashy and loud as any of the latest games. Neveldine/Taylor (who directed the Crank movies) take it to the next step in Gamer, a movie about playing video games.

The only other movie I can think of that involves video games without actually being about a particular game is 1989's The Wizard (awesome side note: the main girl in that movie was Jenny Lewis, as in the indie musician Jenny Lewis of Rilo Kiley, friggin' awesome), although I guess it was more of a promotional tool to promote Nintendo and Super Mario Bros. 3.

Anyhow, this is one of those movies that's more style over substance; dialogues are excuses to get to action scenes. The movie takes place in a distant future where in the most popular video games you get to control real life human beings... like Avatar! The most popular game is one called Slayers, where convicts are pitted against each other in a 3rd person shooter game. It's a bloody affair, but if you survive a certain number of rounds, you can earn your release. Kable (Gerard Butler) who happens to be the world's best avatar/convict/killer escapes the game and is on a mission to save his wife and take down Ken Castle, the mastermind behind Slayers. That's most of the story that I could remember and to be honest, I don't even know why they were doing half the shit they were doing as I was watching the movie... I was waiting for the next big explosion and I think that's the type of people these movies are geared towards... us knuckle-dragging mouth-breathers.

The style they take in this movie is almost exactly the same as Crank: High Voltage. It's hyper stylized, brightly coloured, with top to bottom explosions all filmed with the ever polarizing shaky cam. It's really love hate with this kind of style and I can certainly understand the hate. Basically, it's too hard to follow what's going on when action is filmed this way. But for me, I can forgive it as I like this visceral style of action; it makes me feel like I'm right there behind the action. But at the same time, the action is very generic. There's nothing memorable about any of the fight scenes (unlike the days of old when you could remember every scene in T2: Judgement Day). But the way they film the scenes in Slayers is interesting in that it captures the feel of a 3rd person shooter game like Gears of War or the upcoming Spec Ops.

The cast that they assembled for this movie is pretty amazing. You have Gerard Butler as the main lead, Michael C. Hall as the main baddie, and rounding out the cast are LUDACRIS (move bitch!), Alison Lohman (who ruled in my fav' movie of 2009), Kyra Sedgwick (who's married to the Woodsman), Keith Jardine, Milo Ventimiglia, John Leguizamo and the man with the best voice in the universe... Keith David (playing Agent KEITH)! I nearly pissed my pants when he walked onscreen, but it was too bad that he was only in one or two scenes.

I more or less enjoyed this as much as Crank 2. It's certainly dumb and certainly senseless, but on some afternoons, I just need something like this to turn my brain off to. It's out on DVD now and if you want plain old silly action, then a rent wouldn't hurt. Til next time, later geeks!