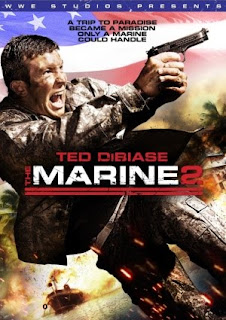 You know, as a wrestling fan, it behooves me to watch shit like this. And by "shit like this" I mean movies produced by WWE Films. Yes, movies by a wrestling company! And last week it was announced in Variety that they were leaving their partners Lionsgate and Fox Home Video in favour of Samuel Goldwyn Films, who specialize in distributing lower budget movies. So everyone get ready for more rinky-dink WWE movies!

Now, if the decision to make a sequel to The Marine wasn't baffling enough, they decided to make a sequel to The Marine starring Ted Dibiase! Ahhh! Brain explosion! Just to bring you up to speed, the only wrestlers that the WWE put into movies are those who are already big stars in the company or those who they want to cultivate into big stars. It's usually done to groom someone who they could market around in the future as a potential champion. So why Ted Dibiase? I know many fans and industry types alike say that he's the next big thing, but I don't see it. He wrestles alright, but whenever he's on the mic, he always delivers emotionless and monotone diatribes. He's a bad actor in wrestling so what made them think he'd be a good actor in movies?

As far as the story goes, the movie is essentially an alternate take on Die Hard 1; a couple is off at a company party (although at an asian tropical resort), foreign terrorists invade the party while the husband is absent, the husband (a marine and not a cop, like John McClane) takes down the terrorists one by one to save his wife.

Acting!
So yah, the movie was bad, but I think if they could of replaced Ted with a different actor, it would have been easier to stomach. Every time Dibiase delivered his deadpan lines, I wanted to remove my eyeballs from my eye sockets and stuff them into my ears.

The one mild positive in the movie though is having Jango Fett as the main villain. The whole time I was watching I was thinking, "man, this guy looks familiar". Then I check his IMDB and am reminded that he played Jango Fett! But who am I kidding; Jango Fett without the suit just ain't Jango Fett.

The movie is out on DVD if you want to check it out. But seriously... why? Paying money to watch crap like this will just encourage them to make more. Go out and dance, those are 1.5 hours better spent than watching this! Later geeks!