Ain't Got Time to Wait on Tables! 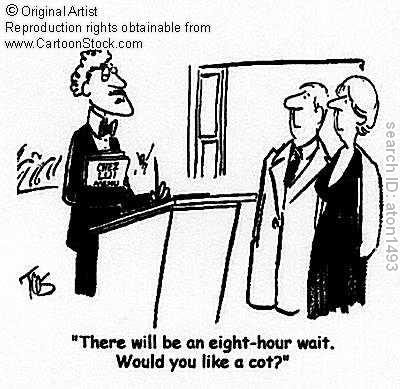 For the past year or so, my Bible reading regimen was to read from the start of the New Testament and move forward from there. I know it's a tactic that some follow while others jump around doing their readings all around the book. I guess it's just a way that works for me as I just need that sense of order in my head. I freely admit that I am behind in my readings, but I continually try to stay on top of things. What is interesting is how on some days I'll do my readings and later on during the week, something I read about will come up again.

Earlier last week I was reading Acts 6-8, but in particular, Acts 6:2 stood out and I read it over and over again because it made me laugh. From the NIV it says: "So the Twelve gathered all the disciples together and said, 'It would not be right for us to neglect the ministry of the word of God in order to wait on tables...' ". In my head I was picturing these ancient wise and learned men taking orders at a table and I guess it was funny.

As soon as I read it though, it reminded me of this church that I went to when I was living in Ottawa. A few years ago, I was living with my former pastor (you can see his website [here]) and his lovely wife as I worked this co-op job at the government. We went to a few different churches around the city but we were finding that we were just not filled or moved by any of them. We finally found this one church that was just starting up and it had two good things going for it: 1) it was a two minute drive from our home and 2) service started at 5:30, affording us that morning sleep in that we all appreciated. So even if the service was shitty, we were at least sold on those 2 points. I'm not gonna mention the church or anyone's names... okay, you've got me, I will. The guy's name was Dave, you know him right? Their first ever service had a good 20 or so people, with about 6 or 7 of them under the age of 12 while the others comprised mostly of Dave's family. We met with Dave and his lovely wife a week or two later and decided to take a chance and support him in this new ministry. There were a few things we were unsure about but he told us some good things and we gave him the benefit of the doubt anyways. What we would soon learn was that this was Dave's Church. We weren't sure if it was really Jesus' church, but we were convinced that it was Dave's Church. Everything from top to bottom was the Dave show. At this point in time, I was one of the worship leaders back at my home church in Toronto, so my services were offered and accepted at Dave's Church in week 3 or so (before we realized it was Dave's Church). I was under the impression that I was leading it like I had in the past; choosing the songs, setting the arrangement of each song, serving as the main vocals, etc. Folly on me, I would soon learn that I was incorrect. Dave opened the service, Dave led the worship, Dave gave the message, Dave ended the service. What a show! All it was missing was some Vegas showgirls and some popcorn and it would have been the talk of the town! After I left Ottawa, my Pastor and his wife continued to attend Dave's Church and often I would receive emails from him telling me how things were going. Well, over the course of the year afterward, nothing had really changed. They increased their attendance a bit, but it was still operating as the Dave Church. My Pastor offered help in various ways and I'm not sure whether it was accepted... the tithing certainly was though. Well, eventually this church exploded and it no longer exists. Dave was too busy waiting on tables.

In the middle of last week, I met up with Pastor iLL seeR to talk about church, Toronto and life stuff in general. Specifically, he wanted to talk about serving at the church. In the middle of the conversation he quoted Acts 6:2. It blew my mind. Just the night before, I had read that very verse (of all the verses I could have read). In about half a second, the story of Dave's Church zipped through my mind. I was thinking to myself, wow, this is the complete opposite of Dave's Church. The iLL seeR gets it. FreeChurch gets it. The pastors are trying to deliver the Word of God, they ain't got time to wait on tables!

Well that's about it for now. There's not really a take home point to this posting either, I'm just sharing a few stories that happened during this past while. I hope you enjoyed the read. Take care! Later geeks!

Beka said…
Enjoyed the read and the cartoons! At first I thought you were going to blog about our horrible service at the at Mexican restaurant.
This was WAY better to read though :D
January 13, 2010 at 4:23 PM

The Lam said…
Glad you liked it :) James liked it too.