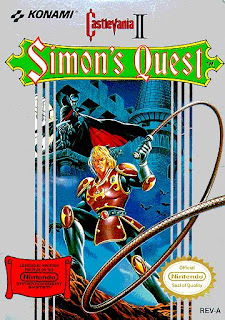 Recently I had this kick where I wanted to play all of the old NES games that I played as a kid. I also decided to do little write ups for some of them in a new segment I'd like to call Retro Rebound! I took some screenshots of my adventures too! Consider these posts an homage to my friend Dave's site, 8-Bit Memoirs, who's site is purely dedicated to old school gaming.

In Castlevania II: Simon's Quest, you play as an adventurer named Simon Belmont who was cursed by Dracula. He learns that he will die unless he finds five different body parts of Dracula in order to resurrect him and seal the curse.

Castlevania II was one of the first games to allow free-roaming, incorporating an action/adventure gameplay and adopting some RPG mechanics. (remember those annoying games that only let you progress to the right and not left?). Every kill garnered you experience points and with enough points you'd gain a level, extending your life bar total. If you're familiar with Castlevania titles, you'll know that the whip is your best friend. As you travel to new towns, you'll be allowed to upgrade your whip, strengthening the hits that you deal out. As you do more exploring, you acquire an array of new weapons, some which are more useful than others. The game also incorporates a night and day system, where enemies are easier to kill during the day, but at night, a curse empowers them making them a lot tougher to kill. To top it all off, the game included multiple endings depending on the time it took for you to finish the game. I don't know if this is the first game to adopt this idea, but it must be one of the first at least. Keep in mind, this was all done in 1988! 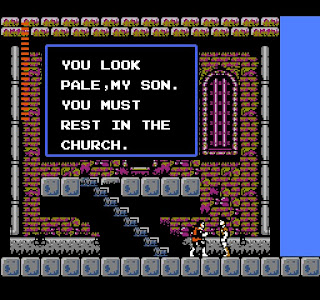 Don't mind if I do! A townsfolk lends me a tip.
Notice that he says, I "must" not that I "should" rest in the church.
My dad bought the game for us when I was 6 years old and I remember some parts of the game freaked me out. I know it's hard to believe, but when I was a kid, I was terrified of anything horror or horror-related. As I grew up, I started to appreciate my fears more. Anyhow, this game is littered with all sorts of scary beings like skeletons, mummies, zombies, werewolves and of course Dracula. The one thing that scared me the most were these green ghoul type creatures who would dart fast from left to right. They weren't hard to kill but were just scary to look at. 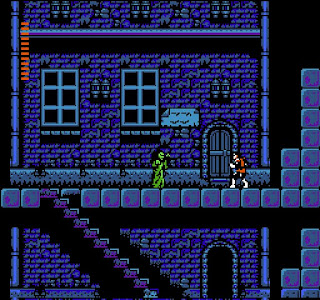 The aforementioned green ghoul!
Thanks to the password save system and a generous life bar, the game is not too difficult. The game is pretty great but it does suffer from a few drawbacks. The poor translation job from Japanese to English left American gamers with only cryptic clues to guide you along your adventure, making it easy to get lost or confused on where to head next. It's still a fun game and I'm still amazed that this was made in 1988.

Beka said…
Oh man, those graphics are so nostalgic. I only like playing old games...the ones I remember as a kid.