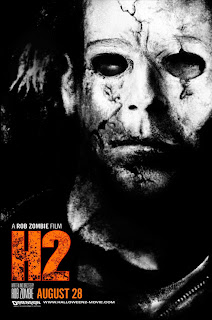 Yah, another bad one.

When the idea of remaking the first Halloween came about, I wasn't really offended like some of the other fanboys. I wanted to give Rob Zombie the benefit of the doubt. I mean, I really enjoyed The Devil's Rejects and thought he could bring that same brutal element to the Halloween franchise, which was itself dying a painful death (his previous faceoffs in the main series was against Tyra Banks and Busta Rhymes... I rest my case).

Anyhow, that movie came out and frankly, I was appalled. It was just not a Halloween movie nor did it seem like Michael Myers. I understand it's a re-imagining from Zombie's perspective, but still if that's the case, then it was just a bad movie in general, let alone a Halloween movie. Well, that was all 2 years ago.

Like all slasher movies, it's not complete without a/some sequel(s). This year, we were "treated" to Halloween 2 also directed by Zombie. Again, being the fool that I am, I wanted to give him the benefit of the doubt. While, yes, I hated the first one, the trailers for this one made it look like things were on the right track. It seemed like it was becoming its own animal, distinct from the original Halloween franchise.

So having watched it now, it indeed accomplished that. It came into its own. This would be its blessing, however, ultimately it's also its curse.

Although this movie is Halloween 2, it isn't a remake of the original Halloween 2 but rather a new sequel to the series. The movie takes place 2 years after the first, with our main hero Laurie coping with life after the tragedies that took place years prior. She's doing her best to avoid being all emo about what happened and moving on with her life, now that her homicidal brother, Michael, is dead. Key thing to note, they never found his body... so how the fuck do they know he's dead?! Well, it's not long before Michael shows up in town blood thirsty and all. And now he sees visions too. Visions of his mother and a horse (?!?!), who beckon him to kill, kill and kill.

You know, besides the names of the characters and a killer sporting a William Shatner mask, this movie in no way resembles a Halloween movie. Had they left the franchise alone and let this be its own completely original movie/series, I think I would have been fine with it. He tries to add a lot of artistic elements to the movie and it just seems to fall flat. At times, it's more like an abstract, indie horror film rather than a mainstream slasher flick that you'd associate with Halloween.

Instead, its association with Halloween is the main crux of my disdain for the movie. This was a piece of trash! Halloween movie this was not!!! My main problem is how Zombie took three of the most iconic characters in horror movie history (Laurie, Dr. Loomis, and Myers) and completely destroyed who they were. With a remake, you'd think that you'd treat the characters with a degree of respect to the original, but he doesn't. Laurie, who in the original movie, was the quintessential female hero, is an unsympathetic brat in this movie who cries a lot and wants to get drunk. Seriously? Why should we care if she lives or dies, because she doesn't seem to. The original Dr. Loomis was an interesting character, the only real bridge between reality and madness for his infamous patient, Michael. He was always the character that you'd feel safe to have around, only because it seemed like he was the only one capable of calming the beast. Zombie manages to twist his character into some sort of fame-hungry, money-chasing, prima donna celebrity, instead of the good doctor like we knew he was. Shit. It's bad, but I wanted him to die! And I shouldn't have to feel that way, especially not for good ol' Dr. Loomis.

And then there's Michael. Okay, I'm going to try not to swear because it could turn into a torrent of havoc. Instead I'll use initials for swear words and you can guess what I'm trying to say. Basically Zombie B.F.'s Michael's character into oblivion. This is no longer the Michael that we knew from the previous series or even from the previous movie. I don't know what the F happened or what he was trying to do, but Michael got F'd. It doesn't take a genius to figure out that if you humanize a monster, it's no longer a monster. Whenever we see things from his perspective, we see not only monster him, but we also see child him. Ughh... And oh yeah, spoiler alert.......... we get to see his face at the end, and he talks?!?!!?!?!?!?!???!?!!??!?!!? F YOU ROB ZOMBIE!!!! WHAT THE FLYING F WERE YOU THINKING?!?! HOW THE HELL DID YA THINK THIS WAS A GOOD IDEA!?!?!?! YOU ARE ONE CRAZY A.F.M.F.!!

Breathe Jeff. Pillows. Sheep. Fluffy things. I am again in my happy place. Moving on then.

There were a few good things in the movie though. This is the second movie I've seen this month with geek favourite Brad Dourif and he does a pretty good job as the Sheriff of Haddonfield. Also good was Danielle Harris who was wounded but didn't die in the first movie. She reprises her role as Laurie's best friend Annie, and comes across as the only sympathetic character in the whole movie.

Also, the violence is damned brutal in this movie. The kills aren't exactly creative, but it's made up for in it's brutality. As I was watching the movie, I noticed a general pattern. Every time Michael went in for a kill, what ever action he needed to do, you had to add a plus 2 to 3 times on top of that action.

So really, there's no reason to watch this movie. It's an abomination to the series. I hope John Carpenter never watches this. That's it for now. Later geeks!