Diving into THE COVE!!! 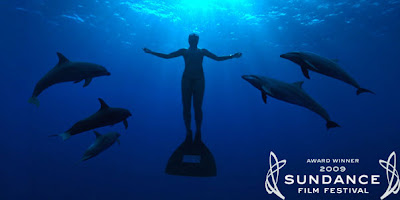 When The Cove debuted earlier this year at the Sundance Film Festival, it was received with wide acclaim, taking home the much coveted Audience Award, overcoming 879 other movies to take the win. Later in the year, it also took home the Audience Award at the Hot Docs Film Festival. So going into this movie, I had high expectations.

At times, The Cove was tear jerking, at other times, brutal, but in the end, there's a great sense of triumph. The movie follows an activist named Ric O'Barry who is trying to stop the people in the Japanese town of Taiji from hunting dolphins. The dolphins are herded off into this secluded area of a national park, dubbed "The Cove", where they are then slaughtered by the fishermen/hunters. Because the dolphins are worth so much money, the town and the Japanese government protect the hunters from doing their deeds, even prohibiting O'Barry from entering the closed off area.

The irony is that O'Barry who is now an activist was also responsible for the popularity of dolphins, having captured and trained them in the 60's for the original TV show Flipper, bringing dolphins into the mainstream media. He tells a heart wrenching story of how he had a change of heart when one of the dolphins who played Flipper died.

I think the scene where I really got into it was when O'Barry began assembling his unique team for this covert style mission. He described it as his version of Ocean's 11, and truly it was, with each team member skilled in a particular ability or attribute. I found that I was holding my breath a lot during the mission scenes when the team would penetrate into the gated hunting area of The Cove.

There are some pretty brutal scenes with the dolphins, so if you are feint at heart, then beware, otherwise, catch this movie if you can. I'm pretty sure it's a shoe-in for an Oscar nod for the documentary category.

Beka said…
I cross between Flipper and Bourne Identity - love the parallel!

The Lam said…
I like the analogy! This was a good movie, I think you'd like it.