The Cost of Life and the Purchaser 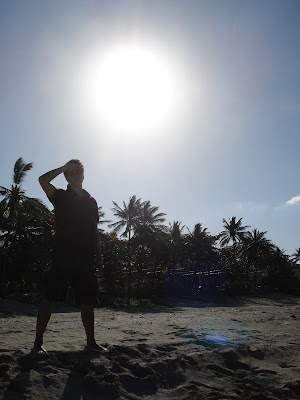 I hope this post doesn't come across as preachy. Believe me, that's not my intention. Rather, I felt very convicted of this during the past week and thought that I should put pen to paper (or fingers to keyboard I guess).

This past week was a bit of a strange week for me. It's not that anything particular happened to trigger it, but for whatever reason, I was in this quiet, contemplative mood the entire week. I suppose as the year 2009 is beginning to wrap up, I was just reflecting on my life and where this ship's headed.

On Thursday night, during my nightly prayer, something really stuck out and I must have prayed about it for a good 20 to 30 minutes. I kept thinking about the cost that Jesus paid so that we could be saved and live. God, being the Great Purchaser, picked up the tab so that we could experience life. But how do we as followers of Christ justify that price, the ultimate price at that?

To put things into perspective, I thought about an analogy of a dog owner buying a dog. Let's say that you were to buy an expensive dog for $2000 (is that expensive or cheap? I don't know, I never bought a dog before but it seems like a lot to me). You buy this dog with all these hopes and dreams. You wish to teach it so that it will become obedient and well behaved. Maybe like in cartoons, you wish for it to be the kind of dog that brings in the newspaper and grabs your slippers for you; the ideal dog. After all, it's a pet you're buying not a 'pest'. So you lay down $2000 and with it, you've got all these hopes of what this dog's gonna be like.

But what if after receiving this dog, it wasn't turning out as you hoped it would be? It's rambunctious, unruly, it doesn't listen to you, it shits where it wants to; it does what it wants, when it wants and where it wants. In fact, you didn't end up buying a dog at all, you ended up with a mutt! So how would you, the dog owner, feel? You laid down two thousand hard earned dollars, it cost you quite a lot.

And how many times in our lives are we like that dog? We march to the beat of our own drum, we do whatever we want, and we shit where we want (hopefully, figuratively and not literally). Have we forgotten that we too have an owner? In fact, He paid an even greater price than $2000 so that we could live. The cost of our lives was sending down His son on the cross to die. He is the Great Purchaser.

As followers of Christ, let's not forget that we do have an owner. Let's be good and obedient dogs. Later geeks.

(Note: I couldn't find a good picture that related to this post, so the top picture is of me being contemplative on a trip to Dominican Republic last year. Photo credit Ally Chan.)