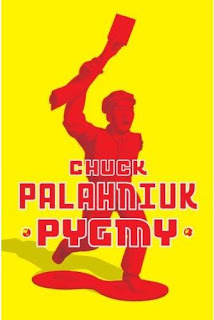 I can't say that I'm a big fan of Chuck Palahniuk, but only because I haven't read much of his stuff. I've read Survivor which was pretty great and also Haunted, which I was hyped for, but disappointed in the end. Aside from that, I've watched Fight Club but never read it. So I'm a fan fo shizzy, just can't claim to be a big fan.

Pygmy tells a story about a young exchange student taken in by an American family. He along with a handful of other teenagers are adopted by families into the same city and are showered with the American ways of living (including handing them T-shirts that say "Property of Jesus" as they board off the plane). Unbeknownst to the dimwitted families is that these cute little foreign students are really military trained secret agents working for their Motherland. The story builds up to a mysterious large-scaled mission called "Operation Havoc" which is almost alluded to in every chapter, but with few details given until the end. Our little hero Pygmy (named that because he is apparently very short) soon wins over the attention of his schoolmates and townspeople, and finds himself leading the charge in "Operation Havoc". But conflicts arise as he gains more affection and adapts to his new found home.

This is likely one of the most bizarre books I've ever read. Because it's written in the point of view of a foreign student, the English we read is broken English... or Engrish to be more precise (check [here] for real world examples). Basically it's written in a manner without any pronouns and also a lack of prepositions. The effect it gives off is a bit daunting at first as it looks more like an orgy of words splashed onto the page rather than cohesive thoughts. This made reading the book difficult at first, but if you gave it a whirl for about 40 pages or so, you'd soon get the hang of the style and the code words that our young anti-hero often uses.

I'll give you an example from the beginning of the book:
"Passport man, officer nothing behind bullet glass, open and reading passport book of operative me, matching to paper facts of visa, man down look upon this agent, say, “You’re a long ways from home, son.” Man, ancient penned animal dying of too tall, pooled heavy blood hanging in leg veins. Trapped all day, then could be next walk to toilet, pow-pow, clot knock out brain."

For me, this book was love and hate at the same time. The story is written as debriefing reports to his home nation, detailing all aspects of his life and progress in "Operation Havoc" (the reports are classified so often you'll see details blacked out by a marker). It bounces between the present day and time to flashback sequences that he finds memorable or relatable to his current situations. I love the core story and the cartoony style scenarios that Pygmy finds himself in. Sometimes the scenes seem like something plucked out of a South Park episode. It's laugh out loud funny and dark in some parts, but you really have to work your way through and earn these moments. It can be frustrating and difficult to read if you're not in the right mood. Chances are that you will miss a lot of details too.

Pygmy himself is a peculiar, hilarious and an altogether interesting character. Being the observant person that he is, he'll zone in and go into detail about the most mundane of things as it's so foreign to him. A lot of the humour comes from his misunderstandings of the American culture and their way of life. But we also see that he's willing to learn much from his peers and from his family members. I think the most amusing thing about Pygmy is how he'll always refer to different martial arts maneuvers that he learned in training. For example: "Could be twin leg of operative me spring to perform Flying Tree Squirrel, zoom-grab, arrest progress of shadow and prevent from imminent fertility attack upon asleep host sister." There must be a hundred of these moves littered throughout the book, and funny enough, on the back cover of the book are some cartoons demonstrating a few of the moves.

Palahniuk makes another interesting decision in never telling us exactly what country Pygmy and his fellow operatives are from nor their ethnicity. Several times throughout the book, we're alluded to the fact that it could be Korea, China, Russia, a Middle-Eastern nation, etc., but it never gives an exact answer. But it really doesn't matter where they're from. Whichever country it is, they don't like America so they want to hurt America. It's as simple as that.

This is a tough recommend. I'll do this three ways. If you're a casual reader and want something easy and enjoyable to read, then you might want to pass on this one. However, if you're a reader who enjoys something different with a lot to chew on (although you have to work for it) then pick this one up. Lastly, if you're a Palahniuk fan, then of course, pick this one up. Regardless, it's a tough read, that's layered and meaty. If you're like me then likely you'll miss a lot of the smaller details and nuances that Palahniuk embeds into the story. I suppose it makes all the more better for future readings.

That's it for now! Later geeks!