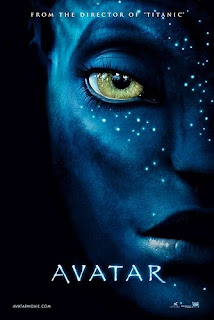 That ain't a bad thing at all.

I'm going to skip talking about the story because basically that's the way I went into the movie (knowing pretty much nothing) and I recommend the same thing for you if you haven't seen it yet. I pretty much avoided all the reviews on AICN, but I did skim over Roger Ebert's who gave it an resounding thumbs up.

I will say this though, while the storyline doesn't really reinvent the wheel, it still makes for a pretty damn nice looking wheel. While not completely original, the story is quite layered and allegorical, and I'm sure there's many different aspects that can be singled out that could be related to past, present or possibly future social conflicts.

I saw the movie on IMAX 3D and the word 'beautiful' doesn't begin to describe how the whole thing looked. It's interesting because as the movie started in the space station and battle station, I thought to myself, "wow, that is pretty cool, but not mind blowing". It's not until 15 minutes later when the crew lands in the jungles of Pandora that my jaw just dropped. It is gorgeous! The world of Pandora is lush, seamless and teeming with life. All the bright colours of the different vegetation in the green backdrop was absolutely stunning in 3D. Anytime the movie switched back into battle station scenes I got antsy for the movie to switch back to the Pandora scenes. I seriously would not mind watching an hour of the Na'vis running around the forests in 3D if only just to see more of their world.

All the actors who played the Na'vis and all the computer geeks that rendered them into life have to be given much of the credit for its success. I don't think the movie would of had such a strong emotional connection if we couldn't believe that the Na'vis were real and so the geeks and their computer powers really brought them to reality. Digital characters have never seemed so good.

It might sound a bit silly, but my favourite character in the movie was the main bad guy, Colonel Miles Quaritch. Of all the characters in the movie, his was probably the most one-dimensional, yet I loved it. He's the stereotypical, macho, bad-ass Colonel character that you've seen in movies before, but I just thought that Stephen Lang (who played him) did a great job of making us hate him (note: I guess it's like in wrestling, I like the bad guys usually more than the good guys). Anyhow, I both laughed and was in awe of his macho-ness in that he'd rather shoot shit down than worry about putting on his oxygen mask or chasing people down rather than worry that his shoulder is on fire. I don't know this for a fact, but I bet if there were cut scenes, we'd see that he bleeds bullets and pisses gasoline. That's how tough he is.

I'm glad James Cameron is back to his geek roots after a 10 year lull with Titanic and documentaries. I can't wait for Battle Angel!

Anyhow, I gotta give special cred to my friend Jeezy for treating me out for this matinee screening. The bromance is strong, LOL. We all loved the movie, so it was good times.

This movie gets a resounding thumbs up and I recommend seeing it in IMAX 3D if it's available in your city. Just make sure you get to the theater at least an hour beforehand to snag good seats. The line-ups were ridick today at the theater we went to.

Beka said…
Great job reviewing it Jeff!
I'm going to Pandora for my honeymoon I decided :) It's just too freakin' awesome and beautiful not to.
December 23, 2009 at 10:08 AM

grace said…
i wasn't really interested in seeing this, but all of you guys had really positive feedback. that's a solid review for avatar!
December 23, 2009 at 7:33 PM