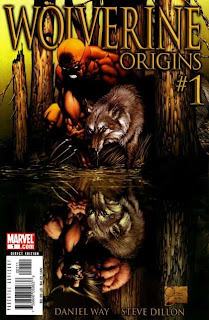 I think I went into this series with the wrong impression. See, with a title like Wolverine Origins you think that you'd get an origin story or a young Wolverine going through his adolescent age to becoming a young man journeying into adulthood. Well, if you're like me, then you'd be quite mistaken.

Written by Daniel Way, Wolverine Origins is actually more of a present day storyline following Logan as he discovers elements of his past. We discover that Wolverine and an American soldier named Nuke were responsible for a village massacre during the Vietnam war, both who were under the influence of the government at the time. With help from Emma Frost (a telepath), it's revealed that Wolverine had a son, who he thought was dead since childhood. His son, Daken, is not only alive and well, but is angry and seeks to kill his own father. That's basically the first 15 issues in a nutshell, but of course I'm missing several elements.

Well, needless to say, I didn't enjoy the first 3 story arcs. Like I said before, I was hoping for an actual origin storyline that took place in times past. And on top of that, it just broke the character of Wolverine for me, knowing that he was/is a father. I'm trying not to be a fanboy about the whole deal, but I just can't help it. I think adding this new element to his character changes his mythos a bit too much. I mean, imagine you find out that Batman once had a son. Wouldn't it be like a big 'what the fuck?' and not in a good way?

I was quite surprised to find that Steve Dillon did the art for these issues. When I started reading this series, I had just finished reading Preacher which Dillon also worked on. Of all the comic book series out there, I just happened to pick two series back to back with the same artist. But having finished reading Preacher and this many issues of Wolverine Origins, I feel more comfortable in commenting on his art work. I thought his style of drawing worked fine for Preacher but it just didn't click with me on Wolverine. Dillon opted for a more realistic style which didn't fit with the way I imagined Wolverine; the stout yet overly muscled mutant. The more realistic style I suppose is influenced by the movie version of Wolverine; a more proportional and human style of drawing him. Having said that though, much like in Preacher, he makes the violence look real, bloody and brutal, not the more cartoonish kind you'd find in the other X-Men series, which I did appreciate.

Anyhow, in the end, I wasn't totally enamored with this series. I guess it wasn't the story I was expecting to read. I might venture a few issues further to see where things go, but beyond that, I might just drop this series. That's all for now, later geeks!