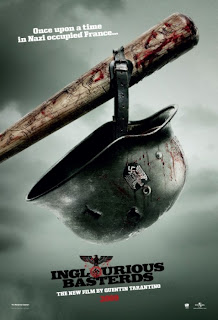 I missed The Inglorious Basterds during its theatrical run and it's a shame too because I'm a fool for Tarantino movies. But I finally got to see it this weekend and I'm happy to say that I mostly enjoyed it. I don't think it's his best movie, but it was damned entertaining.

The Inglorious Basterds takes place during World War II and tells its story by following three different groups of characters: from Lt. Aldo Raine and his squad of soldiers infamously known as the Basterds, Col. Hans Landa, a Nazi colonel better known as "The Jew Hunter", and from a young Jewish girl named Shosanna, who had her family murdered by Col. Landa. We follow the Basterds in their Nazi killing business (and business is good) as they lay out a plan to take out several high ranking officials all at once. We follow Shosanna as she operates her theater and lays down her own plans in exacting revenge on the Nazis. And of course, the "Jew Hunter" is hot on their trails.

What gives the movie life is how Tarantino knits together these long drawn out scenes where almost nothing happens except sharp dialogue between characters; a trademark of his films. The opening scene really shows us what we're in for. We have Col. Lando and a french farmer sitting down and just talking about their lives. At the same time we know something is wrong but we're not sure what and it's not until late into the scene that the reveal happens. There's another scene that takes place in a basement bar in France which is to be the rendezvous point for several of the undercover Basterds. Over and over, they try to talk plans, but continue to get interrupted. We can see the face of one of the Basterds, Hugo Stiglitz, specifically how it changes as the tension builds and builds.

That's what I like about Tarantino, he demands patience out of his viewers. He caught a lot of slack from the fanboy community in Deathproof because it was "slow" and not as in your face as Robert Rodriguez's Plant Terror. But between the two, I actually thought Deathproof was a better put together movie and it was because of the slow sequences of dialogue that made me connect to the movie.

I like how Tarantino intentionally takes liberties with history. The best example of this is the sequence at the theater. I won't spoil it, but it is a bloody good bath of a scene, easily my favourite scene of the movie and will probably remain as one of the most memorable scenes from movies in general.

As of now, it's number #47 on IMDB's top rated movies, pretty darned high. It was a pretty awesome movie, but it could have been more awesomer. The problem I had with the movie was that they didn't take enough time to build to the legend that was the Inglorious Basterds team. There was only one sequence that showed why they were so infamous to the Nazis. I wish there were more scenes to solidify their iconic status, both within the film's context and cinema in general. For example, "The Bear Jew" who was introduced as an almost mythical hero known for beating Nazi heads in with a baseball bat. But we were only shown him doing this once, weakening the legend that he supposedly is. The same goes for Aldo Raine.

Actually, now looking back on it, we weren't given enough time with the Basterds to develop that connection with the characters. I think there were 7 or 8 of them in the band, but half of them weren't even introduced and were offed quickly, before we even got to know them.

With only one and a half months left in the year, time is becoming tight and my top 10 list for the year is still short by 5 movies. I'm tempted to slide this in to make it 6, but I just don't feel it's of the top notch quality to hit the list. If I had an 'honorable mentions' list, surely this would make that. We'll see. It's been sort of a shitty year for movies, at least for me.

Until next time, adieu geeks!