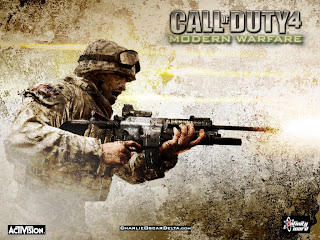 In lieu of the release of Call of Duty: Modern Warfare 2 this week I just wanted to do a small review of the first Modern Warfare game. I guess that's the problem with adopting a new system in the middle of its shelf life; I'm playing catch-up with all of the big releases over the recent years. Buy hey, I'm not complaining. I welcome all lower price tags!

COD4: Modern Warfare originally came out in the Fall of 2007 and was touted as the best shooter (at least on console systems). The game has you playing as Sergeant 'Soap' McTavish who together with a squad of soldiers, travel around the world tracking down a terrorist named Zakhaev. Most of the levels you'll go through are "desert" levels of Middle Eastern cities, but you also get to travel around parts of Russia. The story is told basically only in the segments between each of the levels. For me, the story wasn't the strong point, it definitely has a cinematic feel to it, but let's face it, you're playing Call of Duty to shoot shit up, not for the story. And its in the action where this game excels.

So far, I've completed the single player campaign on normal, easy, and I'm 2 missions away from beating the game on Veteran difficulty (the hardest one available). On normal difficulty, the campaign is quite short, needing only 7 hours to complete it. Let me say that playing on Veteran required a ton of patience. While the bad guys were planting all sorts of bombs, I found that I was equally dropping as many F-bombs. I'd have to take breaks and have meditation sessions just to clear my head of all the cuss words going through my head.

Multiplayer is where this game thrives. If you look around online, you'll often find articles of people buying the game and just going straight to the multiplayer mode, never touching the single player campaign. And who can blame them, it has an addictive system built into it. Basically you start off with only a limited amount of weapons to choose from. As you gain more experience points by killing opponents or achieving map objectives, you'll unlock new weapons and perks that you can customize into 5 slots. The perks are extremely handy granting you anything from stat boosts to extra ammo for your weapons. The maximum level that you can achieve on multiplayer is 55 and right now I'm at 25. My kpd started at a measly 0.30 when I first started, but has slowly climbed to 0.45. Not great, but I'm getting better. Those damned kids are just too much. Funny thing is, I never get pissed when I get owned in multiplayer. My frustration never goes beyond "what the hell! I shot you first!" compared to the "!##%$ #$^%%$& #$^%#$*^ $(%^*#($^ #$%#$%*" that you'd hear if you saw me playing the single player campaign. I guess I can accept that players are better than me, but not the computer. The Lam > Computer.

Anyhow, that's all. I'm guessing if you have an Xbox 360 you've not only played this, but you're probably in the middle of pwning in MW2 right now. Later geeks!