October 16, 2009
It's been a while since I've watched any DTV movies but as Halloween draws closer, the amount of DTV schlock spewed out is turned up a notch. And so here I present two of my findings. 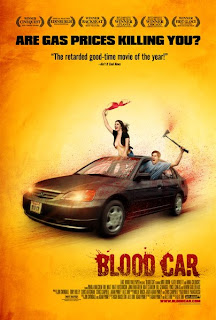 The movie takes place in the near future, 2 weeks into our future to be exact, at a time when gas prices are at an all time high. In this post-apocalyptic future people have stopped driving altogether because of these prices. Cue in a young teacher named Archie who teaches during the day but by night, works on a car engine that will work without gasoline. At first he tries to get it to work by using wheat-grass juice but accidentally stumbles upon a way to get it to work with human blood. So he installs a bladed contraption in his car trunk that will grind up bodies to fuel his new car. Carnage ensues.

The plot is pretty wacky as you can tell. Pretty much, the sole motivation for Archie to kill people for fuel is to get laid. Not the strongest motivation but I guess he's a young man who has to do what he's gotta do. What gives the movie the student touch is at the end when these government agents pretty much spell out what the whole movie was symbolically trying to get across (eg. Iraq war). I think I would of liked the movie more without that bit. Not that the analogy is bad at all but I think it'd be better for us the viewers to figure that out instead of having characters outright tell us.

I was really surprised to see Anna Chlumsky in this movie. Do you remember her? She was THE girl from the movie My Girl with Macaulay Culkin. She's the last person I would have thought to be in this movie. I wonder what's she done all these years and how she came across this role.

So as I said before, the quality of production was pretty low all around but with DTV movies, it's a hit or miss (usually a miss). But even though it was super cheesy, there was a certain charm to it that clicked with me. The movie was in no way great but it was not bad either. 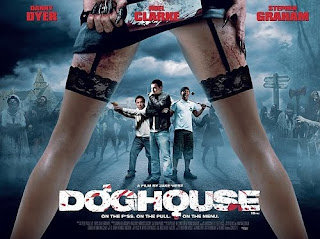 Next up is Doghouse, a British horror/comedy much in the same vain as Shaun of the Dead. I had no idea what to expect as I didn't even bother reading the synopsis but I was genuinely surprised with what I got.

Doghouse follows a bunch of blokes who try to support one of their mates after they find out he's going to be in a divorce (that's as far as my English english goes). The group of them decide to go out to this remote town outside of England, as sort of a male therapy weekend, drowning their sorrows in alcohol and what not. They arrive at the town and quickly realize that its abandoned. They begin to find out that the town is infested with zombies... but for some reason, the zombies only affect females. The poor lads (okay one more) have to fend for themselves and find a way to get out of the town.

The quality of this movie was pretty high, all things considered. The effects were good, it was nice and bloody, and the make-up on the she-zombies looked great. It was great to see Stephen Graham again in the lead role, who I hadn't seen since playing Jason Statham's sidekick in Snatch.

The only downfall of the movie wais its pretty generic story. There was some sort of message they were trying to get across with how men treat women and vice versa, but it was just lost on me, and I was just trying to have a good time with a zombie movie. The type of humour was pretty much the same as in Shaun of the Dead except the script and dialogue weren't quite as witty or sharp.

Still, it was a fun movie and more than I could of expected.

I've attached the trailers below if you're interested. At the very least, check out the trailers if not the movie. Later geeks!