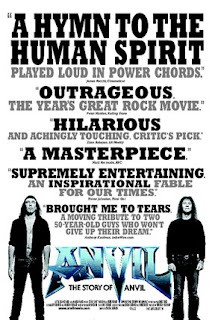 I had no idea what I was in for when I popped in Anvil: The Story of Anvil the other day. I'm not a big fan of heavy metal or 80's hair bands, but I read reviews on some boards and saw the aforementioned Anvil promote their band on Conan O'Brien early this week, so I decided to give them a shot. What a powerful movie this was; it will make grown men shed a tear.

The movie opens up with a montage of interviews and video clips with various people in the metal industry talking about how awesome Anvil were back in the day. We're shown clips of them playing to crowds of thousands of people and on tour with big bands like White Snake, Poison and Bon Jovi amongst others. All these other bands grew to great success but for some reason, Anvil was left behind. Yet at the same time, they were apparently quite an influential band to many of the popular hair bands of the 80's including Motorhead, Metallica, Megadeth, Slayer and so on.

After the brief intro, things pick up in the 2000's (I think around 2006-07) and we see Lips (the lead guitar and vocals) working his bland job at a catering company for elementary schools right here in Toronto, Ontario. We follow him and his bandmates as they work their day jobs and as they play local gigs to large crowds of tens and sometimes even dozens of people. We then follow them to Europe where a hookup lands them a month long tour. Things start off good as they play a big festival, but then reality hits when they start playing clubs to fives and tens of people. We see the defeat in their aging eyes, but we also see the hope they have.

The rest of the movie documents the trials that they go through, be it with each other, record labels or just the music scene in general. It's a journey of grown men trying to attain that dream of the proverbial '15 minutes of fame'.

The movie was put together wonderfully by Sacha Gervasi and which happened to be his first feature. It was effective at playing with the viewers emotions. At times, the movie was laugh out loud funny while at other times was very heart wrenching watching these 50 year old men trying whatever they can to hold on to their dreams. The most powerful aspect of the movie was the sense of inspiration it gives off in seeing the determination and the drive, especially of Lips, to achieve his dream.

In many ways, this movie reminded me of The Wrestler except that this was for real and was about a metal band from the 80's (same hair though). In The Wrestler we're introduced to a man who had much fame and success in the 80's and for whatever reason, had it all fade away in the 90's. The movie fast forwards to 2008 and follows his mundane life of working through menial jobs just trying to make ends meet. At the end he finally gets a small piece of that glory which he once had.

This movie is accessible by anyone even if you don't like metal (like me). This movie has the Lam's seal of approval and if you get a chance, I say, check it out! Until next time, later geeks!

"Metal on metal, it's what I crave. The louder the better, I'll turn in my grave"
-Metal on Metal; Anvil

Unknown said…
My friend recommended this one to me last month and I agree- it's fantastic. I wanted to cry at a couple points, but it was great inspiration, too. Love it. :)
October 15, 2009 at 10:35 PM