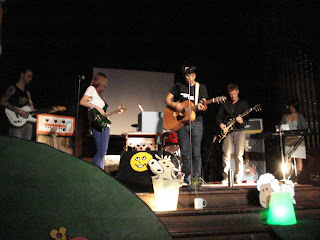 Last night I attended the CD release show for Andrew Huang under the name Your Heart at St. Stephen in the Fields church (home of Freedomize Toronto). The album is called "Summer" and it's his goal to release one themed album for each season, with this being the first one.

In the promo flyer it said that there would be cookies, farm animals, and Barack Obama. All three were promised and delivered. It was a nice intimate atmosphere capped off with candlelit tables which gave off a great romantic mood even if you're not romantic. 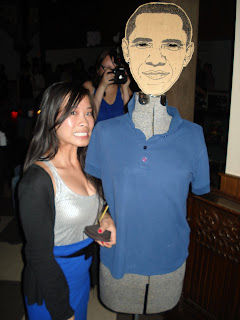 My friend Vicky with Mr. President himself.
In addition to releasing his CD, it was also the debut of the music video for his song "In the Sun", which opened up his set. The set was an eclectic mix of upbeat songs and more mellow tunes. About half the songs were performed with a full band, while the others were filled with selective instruments. The show ended off with a live performance of "In the Sun", to which a fair group of dancers filled the front stage area, I guess the crowd favourite.

I'd say the only thing that hampered the show was the balancing of levels on the mix board. The instruments came through fine, but the vocals sounded a bit muffled and it was difficult to make out what the lyrics were. However, it was a fun show, and hey, it was free cover, can't argue that!

Check out his website (here and Myspace). Below is a preview for the music video. Later geeks!

Beka said…
Thanks for inviting me out! A great night for sure. I love the CD even more because I can hear the vocals! Ended up being a reunion night for me - who knew.
September 3, 2009 at 11:38 PM

The Lam said…
No problemo! I'm just glad that everyone had a good time. And it's so awesome that you could see a bunch of your friends again. God smiles at your joy.
September 4, 2009 at 12:07 AM