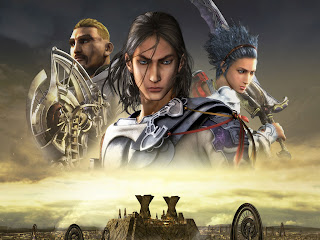 Some of the minds behind the Final Fantasy series have come together to bring an RPG epic to the Xbox. Produced by the Final Fantasy master mind Hironobu Sakaguchi, Lost Odyssey is one of the few large scale Japanese RPG productions for the Xbox.

The story follows an immortal warrior named Kaim who is a soldier for a nation named Uhra warring against a neighbouring nation, Gohtza. Kaim, who has lost all of his memories, becomes a pawn to the nation until one day he starts recovering some of his memories. On his adventures, he is joined by three other immortals who have also suffered similar memory loses and a band of ragtag humans. The story follows the party as they seek the mystery behind their vanished memories which unravels a larger political scheme behind it all.

From a technical standpoint, the game is very polished; from the designs of the areas and characters to the music. Spanning 4 DVDs, the game is beautiful in high definition. Everything is colourfully painted and rendered. The music is composed by Final Fantasy mainstay Nobuo Uematsu and I'd say that his orchestral pieces were some of my favourites from this game. The music really drove the emotion and made it feel like a grand adventure even the n00b beginning battles. However, not everything is perfect; there are a few scenes that seem out of place such as a Barbara Streisand-esque musical interlude in the middle of the game. It weirded me out. Even my brother who was watching was like "what the hell?".

The combat is turn based and allows you to have five members in your party at once. I really appreciated this. I like having five membered parties, which Square-Enix seems to have done away with in the last batch of Final Fantasies; three seems to be their number now. The skill set system is a hybrid of something between Final Fantasy IV and IX. Your mortal characters learn a set number of predetermined abilities and skills based on their level number; pretty standard affair. Your immortals however have to equip items which have abilities on them. But you have to gain a certain amount of skill points to fully master them which you gain from battling. In addition to items, you can link a skill off of your mortal teammates in order to learn abilities off of them; abilities that you might not find on items. This can take a lot of time as you have to micromanage your items and skill links every battle or two.

What keeps this game from being great is that it's so vanilla in terms of the storyline and especially the character development. The game opts for the tried and true formula of two warring nations and one man's rise to power. The members of your party are even more one-dimensional with the worst being the main character, Kaim. He's too stoic and too unemotional that it gives you no reason to get behind him. I can't remember a more boring main character. I think the Goombas in Super Mario have more charisma than this guy. However, the saving grace comes in the form of this wizard character named Jansen. He's the only character that shows an ounce of emotion and humanity and he's the only character I really got behind. At the same time, he's also a polarizing character; it's a love hate situation on gaming forums. To me, he's the most real character in the game.

The number of save points can also be irksome. Generally, each dungeon has a save point at the beginning and at the end just before a boss. The problem is getting from point A to point B often takes an hour and a half. Sometimes when you get into battles you have to really pray that the enemies to KO you or it's back to the start for you. Could be a pain in the butt if you were an hour and twenty nine minutes into the dungeon. A bit more nitpicky is the status ailment effects. Maybe it was lost on me but I had trouble figuring out what some of the effects were (well, I also never cracked open the manual). Whenever an enemy casts something on you, all you get is a coloured orb beside your character's name, no words or descriptions of what you're infected with. A bit annoying in the heat of combat.

The game is a solid playthrough and in the end is good but not great. With a minimum of 35 hours to completion, you really get the bang for your buck. If you're looking for a nice long journey then you can't go wrong with Lost Odyssey. The game doesn't really seek to reinvent the wheel, it just tries to make a nice sturdy wheel. That's about it for now. Later geeks!