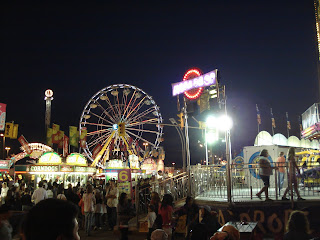 Yesterday, our church small group took a trip down to the Canadian National Exhibition, or The Ex as it's more commonly known. They had a wicked deal this year; between Monday to Thursdays, if you go after 5pm, entrance was only $5, compared to the regular $15. This worked well for our group since most of us worked until 5pm. 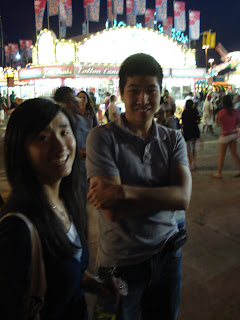 My friends Matt and Tracy.
The Ex is Canada's largest fair and actually the 4th largest in North America (I guess it'd be something like America's state fairs... although I've never been to one of those). There's lots to do there like losing your money to the carny games, wasting your money on expensive carny food, some shopping, some live music, and so forth. It takes place every year for two weeks at the end of summer and completes on Labour Day.

It's been a number of years since I was last here and nothing much seems to have changed. I paid $8 for some "Kentucky Style Chicken" combo that came with 2 pieces of chicken and some fries. It was okay, but it wasn't $8 okay. Maybe $6 or $7 if they push it. My goal during this visit was just to have a Beaver Tail, and I did, so I felt accomplished. If you've never had a Beaver Tail before, just ask Barack Obama and he'd tell you. It's a deep fried piece of dough that you can put different sweet toppings on. I opted for the cinnamon and sugar topping which seemed to be the popular pick. It was delicious.

Our young friend Kevin (who works at a carny game in the park) had a day off, so he came with our small group for the visit. He amused me more than once. If I didn't know him, I would of thought that this 15 year old owned the park. Well, I laughed. 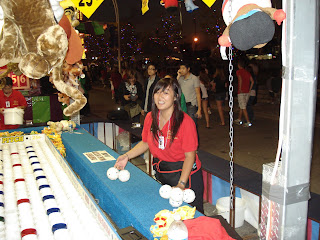 Linda working her game.
Our friend Linda (Kevin's older sister) was working the carny game and actually let a bunch of us give it a try. It's one of those games where they have a shit ton of cups on the table and you have to throw a whiffle ball into certain coloured cups to win a prize. I think Kevin was saying the odds were 1 in 240 or something ridiculous like that. My friends one small prizes, I think a little plush turtle and a flower. Linda gave me Sonic the Hedgehog stickers as consolation. Score :) 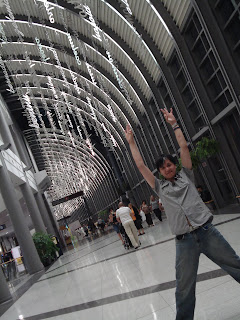 Booyaka! Booyaka! 416!
We then checked out the Direct Energy Centre which housed hundreds and hundreds of vendors. This all seemed like another carny act to me though. Many of the vendors were like those TV infomercials trying to shill you their crap. Case in point, there was one woman selling these brooms with rubber thistles for $20. BUT WAIT! She brought in 12 extra ones, so the first 12 people to buy one would get another FREE! Oh the suckers that fell for this carny act, I was surprised. But then again, I'm not. There were some good deals on clothes if you wanted them for cheap, it wasn't all carny tricks. I bumped into my friend Ben from University, it was an awesome chance meeting, he's a solid dude.

Well, it was quite a fun night. I was tizired as shizit when we left. That's it for now. Lizater gizeeks!

Hi just wanted to give you a quick heads up and let you know a few of the images aren't loading correctly. I'm not sure why but I think its a linking issue. I've tried it in two different internet browsers and both show the same outcome. facebook login facebook login
April 21, 2018 at 7:45 PM