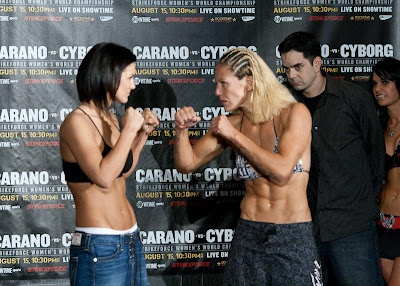 I'm not a huge MMA fan, just a casual fan but there are fights that I get pumped for, notably any events that have either Brock Lesnar, George St. Pierre, or Gina Carano fighting.

The fight came down between the Brazilian, Cris Cyborg, who specializes in Muay Thai and Brazilian Jiu-Jitsu. Cyborg, the more skilled fighter and favourite to win the match, at the age of 24, possessed a record of 7-1 going into this fight. 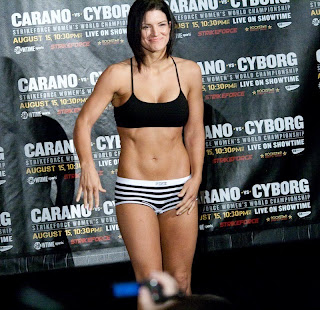 Gina at the weigh-ins.
Clearly the fan favourite (at least at the arena), America's own Gina Carano, 27, who also trains in Muay Thai with boxing, went in with a 7-0 record. Carano has been basically the poster girl for the female MMA sport. With her stunning good looks comes also her brutal talent in the cage, but would it be enough against the more skilled Cyborg.

Right from the get go, Cyborg dominated the fight with lots of shots and a few takedowns. Carano appeared a bit more fearful and played more defensively. The fight was scheduled for five 5 minute rounds, but it was clear at the 3 minute mark that they were gassing out, and unlikely to make it to the second round.

With about 10 seconds left, Cyborg got on top of Carano and laid down some hard ground and pounds to Carano's head. Carano laid her side, turtling, trying her best to hold out until round 2. However with less than 1 second left in the clock, the ref stopped the fight as Carano didn't respond with any defense, giving Cyborg the win by TKO.

It was quite an exciting fight to watch. People that were there at the fight said that it was electric and that everyone was on their feet the whole time during the main event. They also said that Carano was the biggest star of the night, receiving the most reactions from the fans.

However, new questions arise at the conclusion of this fight in regards to this female division of MMA. With the top two fighters already having battled, who would be the next challenger to Cyborg's championship title? And what of Carano? One scenario would be to build her up for a re-match, but would it have the same luster?

Attached below are two videos. The first video is just a short promo video that Showtime released to promote the fight. The second video is the actual match. If you've have 5 minutes free, check out the match. See the intensity! Later geeks!