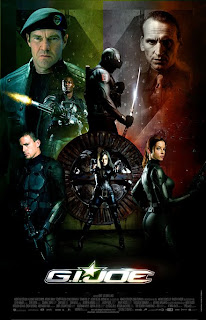 Ah yes, the cartoon to movie spectacles continue rolling out! This month, one of my childhood favourites, G.I. Joe: Rise of the Cobra made its live-action debut on the silver screen.

The movie was basically one of their old school episodes made into a 2-hour full length feature. And just like the cartoon, there were wacky characters, a far-fetched plot elements and non-stop action.

There is not much to the story at all: the Cobra forces are after some deadly warheads and it's up to the Joes to stop them. I say Cobra forces, because that's what I know them to be from the cartoon, and I may be wrong, but I don't recall them once being called The Cobra in the movie. Was it just me?

At my most primal state, I think all I could ask for is big action, explosions, guns and car chases. I think that's why I enjoyed Transformers: RotF more than most people. And the same would be here, except I enjoyed Joe several more degrees than T:RotF, thanks to the lack of offensive characters and bad comedy. No, Joe skips over the bad jokes in loo of more action. And that's what this movie basically is; it's a 2-hour roller coaster ride with bright lights and big sounds. After the movie, I was talking to my brother trying to figure out why certain things happened and how they related to each other. We gave up thinking. I concluded that certain things happened so that we could see that big explosion or those cool vehicles.

The action when it happens (and it happens) is good once it hits the screen. It's not the greatest action scenes you'll ever see, but there are some memorable scenes (the first time we see Snake Eyes, the elevator ride down to Joe HQ, Storm Shadow VS Snake Eyes come to mind). I think what I liked most was all the different weapons, gadgets, and vehicles featured throughout the movie. It seemed they had a different vehicle for every situation. How crazy is that? It really reminded me of the cartoon. Much like the Transformers cartoon, the original G.I. Joe cartoon was used as a way of promoting new toys for kids to beg their parents to buy. Every episode you'd meet new characters, with new vehicles and bigger guns. They'd lure you in. I couldn't help but to think the movie was trying to do the same thing; introduce as much toys as possible so that kids would buy it. But it's too bad that kids don't really play with toys these days.

I'm really glad that they kept the plot over-the-top and unbelievable, much like the cartoon. Had they gone for a more realistic plot, I think the movie would have seemed very vanilla in the end. The best thing that I liked about the story is that the movie was never about just one character. Even though there were 2 or so main characters for the Joes, it was always about the team. Every character had a certain role they had to play and each person was equally important for the missions. So in a way, the movie really represents G.I. Joe values; it's not about the individual, it's about the team. With that said, Snake Eyes must be one of the coolest characters to ever grace the cinematic big screen. I would not be adverse to a spin-off movie starring him... and Scarlett (*blush*).

However, all the love aside, there were a few things that I didn't like. First and foremost would be the shoddy CG work in some of the scenes. The movie had a $175 million budget, yet some of the effects looked so amateur (the last few scenes and desert scenes come to mind).

The second is more plot-wise and I'm going to revert to wrestling mode to explain an effective storyline. In the wrestling world, effective storylines would often last for months. The bad guys would always have the advantage and dominate over the good guy, to build up more tension (heat) and drama. The big payoff comes at the end of the story when the the good guy will finally triumph over the bad guy, and the crowd goes wild because the bad guy finally gets what he deserves. The good guy should never have the advantage during the buildup of the storyline. Case in point, in G.I. Joe the good guys were never really at odds or in peril here. The match-ups and fights always seemed pretty even and many times it was the good guys that had the advantages. This brings the drama and the tension down in any climatic scenes.

Lastly, and probably more of a minor issue, is what they did with the Baroness' character. I don't like the backstory they give her (which was no doubt made to reach a broader audience) and what eventually happens to her. As I remember from the cartoons, both her and Destro were always such villainous and despicable characters.

Of all the Stephen Sommers movies I've seen, I'd have to tie G.I. Joe with The Mummy Returns as his best movies. It was also a nice surprise to see several of his regulars make an appearance, including the likes of Arnold Vosloo, Kevin J. O'Connor and one big one! I'm not gonna spoil who he is, but he's the most famous one and I just had a huge grin when he appeared on screen (actually I think I had a huge grin for most of the movie).

Anyhow, wow! This turned out to be a longer review than I originally intended. So my recommendation? Turn off your brain and go see it for 2 hours of fun action. Later geeks!

Mike said…
As a child who grew up with the 80's cartoon series i'm not sure this translated so well but definitely worth a rent when it comes out.
August 26, 2009 at 12:17 PM