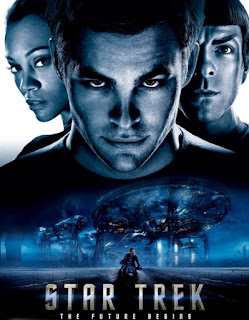 I finally watched Star Trek, over 2 months after its release and at the behest of my friend Ally. So Ally, if you're reading this, this review goes out to you, and you can now stop asking me if I watched it yet (Tootsie LOLLs).

I guess the benefit of watching a movie so long after its release is that you get your pick of the litter in seats. The theater was mostly empty, except for a dozen or so Level 10 Geeks, who no doubt were watching this for the 56th time (side note on Level 10 Geeks: the geek beside me did the vulcan hand sign every time Spock did it onscreen). I was never a big Star Trek fan at all, which is probably why I didn't feel pumped to see it when it came out in May. But after watching this, I feel excited for a sequel.

So what can I say? This movie pretty much ruled.

Most of you probably have watched this already, so there's no need to really go over the plot. But in short, it's a prequel to the old school series as we see how the main Enterprise crew is assembled. Cue in alien race who threatens the existence of mankind (and Vulcan-kind). Young Kirk goes through a life lesson learning process including a short stint on what appears to be Hoth! I was seriously hoping for a Wampa to pop out. It would have been a geekgasm overload. Instead, they opted to use other strange new creatures.

The movie was all around entertaining with lots of action and humour. I watched the original series when I was 7 and 8 years old, so my memories of what the original characters were like are a bit fuzzy. But from what I can tell, the actors this time around bring their own essence to the characters, breathing new life into them instead of making a parody or caricatures of the originals.

I gotta hand it to JJ Abrams for making this an enjoyable experience. I wasn't a big fan of the Mission Impossible series, but I found he was able to turn it around and make it edge of your seat entertaining with his entry Mission Impossible 3. And just like with MI, he did the same thing here to reinvigorate the Star Trek franchise.

The writers did a clever job of making sure not to get the geeks all too riled up by playing the time-travel/alternate-reality card in order to explain any discrepancies there might have been in the continuity in this movie and the original episodes.

I haven't seen Chris Pine in anything before, but he did a fine job playing the brash and smug young kirk. Zachary Quinto was pretty damn awesome as Spock. I'm glad to see him on the big screen and hope he continues to after Heroes flounders. Karl Urban's Bones McCoy was probably my favourite character. I've always wondered why he was such a grumpy guy and I guess now I know. Urban continues to be one of my geek favourite actors. I mean, check it out. He can add Star Trek to a list of movies that include LOTR, Doom (well...), Chronicles of Riddick, and Bourne Supremacy. I think he resembles the hunky Brad Pitt circa 1994, but some of my friends think otherwise. That brings us to Zoe Saldana who plays the leggy Uhura. This woman, I tell ya. One word: blacklicious. Anytime she was onscreen, I ignored everything else. But I do have one question. How exactly did her skirt pass Starfleet uniform regulations?

My only complaint about the movie was lack of depth given to the Nero character. As the saying goes, the hero is only as great as his villains. Sure we see the Romulans wreak havoc, but there wasn't enough build to why they are the way they are... save for a 1 minute flashback scene. That is my only gripe and even then, I can forgive them as they are trying to reboot the franchise and their concern is more about building the Enterprise crew.

Anyhow, fun movie, like I said, I can't wait for the sequel. You've probably seen it already, but now you know how I feel about it. Until next time, later geeks!

Mike said…
Loved it, the actors all did a great job of putting their own spin on the characters while maintaining a feeling of familiarity. Another win for JJ Abrams.
July 16, 2009 at 2:25 AM

Ally said…
So glad you liked it! Now we can geek out together, for once. :P

And for one of my favourite scenes, EVER:

Ally said…
This one is good too:

[Security Officer] : Kirk, James T. He is not cleared for duty aboard the Enterprise.
[Leonard 'Bones' McCoy] : Medical code states the treatment and transport of a patient is to be determined at the discretion of his attending physician. Which is me! So I'm taking Mr. Kirk aboard. Or would *you* like to explain to Captain Pike why the Enterprise warped into a crisis without one of it's senior medical officers?
[Security Officer] : As you were.
[Leonard 'Bones' McCoy] : As *you* were!
July 16, 2009 at 4:09 PM

The Lam said…
I really hope you found those pieces of dialogue online, and that they weren't regurgitated from memory.

As I was watching the movie, I thought a pretty interesting spin-off movie would be about Spock's mother and father, I guess their origin story. It would be interesting to see how a human woman teaches an alien man who can't feel, how to feel. He did tell Spock that he loved her, but what does that truly mean to him. I wonder.
July 16, 2009 at 4:35 PM