With my limited Photoshop skills, I took some time this weekend to recreate a gadget and send it in. I made a 70's ad for a 70's version of the Sony Playstation Portable.

Today they posted up their results but reneged on their original post. Instead of posting the top 3 results, they just posted 64 different gadgets and didn't even rank them (sad face). Some of the creations are damn 1337. I wish I had those kinds of skills.

Worst for me, there's a handful of images that won't load for people, and one such image is mine (more sad face). But I've attached it below so you can at least see my creation. You can check out the rest of the results (here). 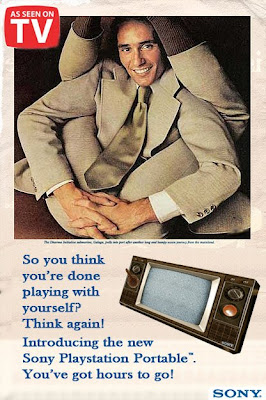