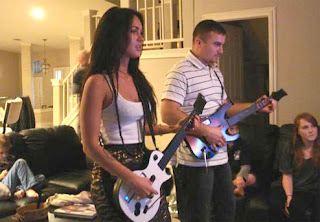 I'll admit, I'm not that huge of a Megan Fox fan. Yes, she's a babe, but the looks can only go so far. If she were a more talented actress, then I guess would feel otherwise, but she's not (at least not yet). However, assuming the following article is true and not fabricated by sweaty palmed geeks, then her street cred is going up in my books.

In an interview with What They Play (credit Kotaku), Fox talks about her gaming life past and present. It's not the generic celebrity answer of "I play Super Mario", or "I love Tetris", or even the more generic "I play solitaire". No, she speaks more truthfully about her geek life. Her first game was Disney's Aladdin for the SNES. But the game she's loved the most and still plays nowadays, is Mortal Kombat (and it's various incarnations). She says that right now she's playing through Mortal Kombat VS DC, and she even goes further to say that she hates playing as Superman, because his combos "were so weird".

What a babe eh? It's too bad that I don't like Mortal Kombat... but I'd kick her ass at Street Fighter IV... in my dreams.

If you want to read the original articles you can find them here (What They Play / Kotaku).

Anyhow, I leave you with this gif that someone posted on the F4W board. Later geeks.

Beka said…
Stop showing my boyfriend stuff like this! How can I compete?!?