A Lion's Tale: Around the World in Spandex 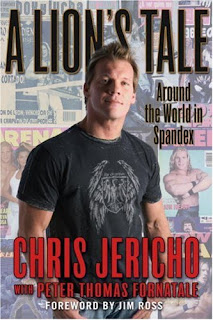 As part of my "campaign of cheapness", the past 3 months I've been going to the Indigo bookstore downtown about twice a week to read Chris Jericho's autobiography A Lion's Tale: Around the World in Spandex. I'd park down for about 1.5 to 2 hours per visit and it took 3 months to do, but I finally finished it.

Let it be known, that Jericho was my favourite wrestler from 1997 to 2002 (it only lasted this long because from 2002-07, I stopped watching/following wrestling completely). I learned of him during my junior high school years when me and my friends would watch WWF and WCW programming religiously. I knew there was something that stood out in Chris, it might have been his style of fighting, his comedic arrogance on the mic or his boyish good looks. Well whatever it was, I believed in him. My friends at the time were skeptical, but I would argue with them why he was so great. It was during his cruiserweight feud with Dean Malenko that really brought out his character to us. It would only be weeks later that they'd open their eyes and see his greatness, and soon after they were right on board the Jericho-train as I was.

The only other wrestling biography I've read is Bret Hart's, which between these two I'd say is my favourite (one of my favourite books in general), but that's not to say Jericho's book isn't entertaining in itself.

The story is a telling of Jericho's rise to wrestling fame. From the get go, he's always wanted to become a wrestler. When he was in highschool, he and his friend would trick the janitor in letting them use the gym and some mats to create their very own wrestling federation. Soon after high school, he joined the Hart Brothers School of Wrestling, in hopes of getting trained by the famous Hart brothers. The book follows his humble beginnings, from wrestling in bars and school gyms around North America, to his adventures around the world, notably Mexico, Germany and Japan.

Jericho makes the interesting choice of ending the story at the moment where he makes his debut in the WWF/E, leading us hopeful Jericho-holics to believe that there could be a potential second biography that will detail his career after his debut.

A Lion's Tale was a joy to read. Jericho did a good job of keeping things serious when they're serious and humourous when they're humourous. If you're familiar with Jericho's brand of comedy, then you'll know what to expect in this book. The book is also noob-friendly to those who might not be familiar with wrestling concepts and he does a fine job of trying to explain what things are to newcomers (ring rats come to mind, try explaining that one to your mom).

One thing that I learned about Jericho was that he's a Christian.. It's how he came up with the name Jericho (his real last name is Irvine) for his character. He doesn't talk about it too much, but makes mention of it early in his career and also later in his career (when he was already in WCW). I found the stories of how he'd try not to fool around with girls entertaining. It seemed he managed pretty well earlier in his career but the temptations got tougher as he began travelling around more. "The road will own you".

I liked the book because I learned not only a lot more about Jericho as a man but also of the wrestling world and how things work in general. Here are but a few things that I learned:

-it's customary for a wrestler to introduce himself to the entire lockerroom if he just joined the company.
-there's hardly anyone you can trust in the wrestling world, everyone's out there to make a dime (although from what I gather, there's more trust as you move to bigger leagues, but still, you can't trust everything everyone says).
-on that note, promises are almost worth nothing.
-at least in the independent wrestling companies, it was the babyfaces job to service the ring rats, as it helped keep a good flow of cash coming from ticket and merch sales.
-strippers really do have this strange relationship with wrestlers (so it wasn't just some symbolic relationship created for the movie The Wrestler).

and my favourite fact:

-if you have sex with a girl and at the end of the 30 seconds she giggles and pats you on the back, it's not a good thing.

So if you're a wrestling fan, I definitely recommend Jericho's book. A really fun read all around. If you're not a wrestling fan and have nothing else to read, it's not a bad one to pick up either. Maybe it'll make you a fan. Jericho makes me proud to be a Canadian. Later geeks.