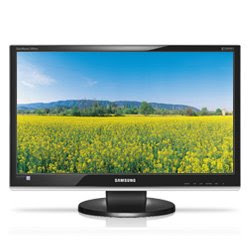 (This post goes out to Skylar, who loves tech stuff.)

In random news, my dad bought me a new monitor earlier this week. He was looking at different monitors for the past 2 months or so, but I kept telling him not to because the ones he was looking at were too big for my room and my 19" Samsung was more than fine. Well, he bought it anyways and now I have this massive 24" Samsung widescreen on my desk. He told me afterwards it was my late graduation gift, to which I thought the Xbox was, but apparently that was a Christmas gift. I'm a spoiled son of a bitch, right? So I accepted, although with a massive amount of guilt (I don't feel I deserve this).

So what do I think?

The Goods: This fucker is massive. I'm no longer maximizing the windows because it's too much for my eyes. I like how there are multiple input options. Currently my computer is hooked in through the DVI, but there is also HDMI support. A light bulb went off in my head when I saw this. I immediately brought up the Xbox from the living room to test it out. It performs really beautiful and really sharp! Another bonus is that it has speakers within the monitor, so you don't have to re-route speakers if you want to game. However, I didn't want the Xbox in my room as it's a clutter already so it's relegated back to the living room. I like that I can adjust the stand's height, so no longer do I have to slouch my neck while I'm on my computer.

The Not-So-Goods: Instead of buttons on the bottom corner of the screen, this monitor has touch sensitive areas, so to switch between inputs, adjust any settings, or to turn it on/off, all you have to do is touch the right area (that's what I tried to tell her). Unforunately for me, the lighting in my room is pretty dim at night which makes it hard to see the little symbols for the different functions. I find I'm touching all over the place and adjusting stuff, when all I want to do is turn it off. I realize this is all a preference thing, but I wouldn't of minded normal buttons.

The Neutrals: If for some reason you wanted to, you can rotate the monitor so that instead of landscape you can have it oriented portrait-wise. I'm not sure why you'd want to, but the option is there if you do. There's also USB ports on it.

Anyhow, I'm enjoying the new monitor. It's been great for watching movies and TV shows, and especially great for playing Team Fortress 2. My dad is nuts sometimes, but I do love him for this. If you're interested in specs, you can check them out (here). Well, until next time, later geeks!

SkyCapitan said…
Yo, thanks for the dedication.