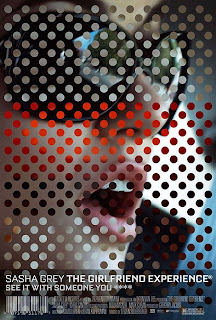 Amidst all the summer blockbusters opening this season, Steven Soderbergh's latest will open quietly into limited screens this weekend.

The Girlfriend Experience doesn't have a storyline in the conventional sense; instead it opts to show a certain slice of life. In this case, the life we get to witness is that of a high-end call girl (or escort) and how she struggles to keep on top of things (no pun intended) while maintaining a relationship with a steady boyfriend, which apparently is a rare thing for women in her profession. We also get to see life from his perspective as he struggles to stay on top of his game as a personal trainer.

Interestingly enough, the backdrop of the movie is set against the 2008 US presidential election. There is constant talk about the economy, the recession and Obama's likely victory. It's a clever way of symbolizing a sense of hope in the middle of all the darkness, which seems to parallel the lives of the two main characters.

Soderbergh made some interesting decisions in terms of casting in this film. He hired an adult actress (Sasha Grey) to play the lead Chelsea and a real life personal trainer (Chris Santos) to play her personal trainer boyfriend, Chris. Grey, having no mainstream acting experience holds her own in the lead role, but I think its Chris (who has had zero experience) that really stands out and shows emotion in his role.

After its premiere at this year's Tribeca Film Festival, Soderbergh did a panel discussion where he talked about how people have this desire to see celebrities in sexual situations onscreen. With Experience, he wanted to see if he could create the reverse effect by using someone who is more known for her openness in her sexual exploits and placing her in a role where she is more vulnerable and emotionally intimate.

Soderbergh continues to be an interesting director, moving back and forth between bigger budget high-acclaim films (Ocean's 11-13, Traffic, Erin Brockovich) to smaller profile films (like Girlfriend Experience and Bubble). This movie was shot on a budget of $1.7 million over a course of 17 days. He shoots this movie with finesse and with Manhattan as its principle location, appears very lush onscreen. The movie is made almost in a documentary type style making the movie seem all the more real.

If you want to take a breather from all the blockbusters going on and give your eyes a rest from all the CG, give The Girlfriend Experience a shot if it's playing in your town. Later geeks.