Fasting Completed!!! And other things. 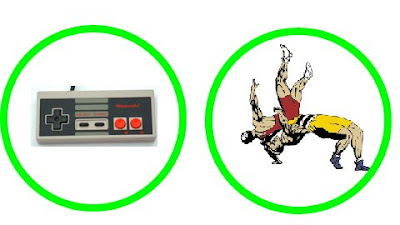 My 7 days of fasting of video games and anything prowrestling related completed this past Monday, May 25th, 2009 at 11:15 pm EST. I talked about it in a previous post, and I'm happy to say it finished without incident.

It was tough for the first 2 days but afterwards, was more easier. I was telling some friends the other day about it. Avoiding the temptation to game was much easier than it was to avoid the temptation of wrestling. Following wrestling is such a routine part of my day that made it all the harder to avoid. It sounds kind of crazy and maybe stupid, I know. Avoiding gaming was easy because there are steps to go through before getting to the game. But to me, avoiding wrestling industry related news would be analogous to avoiding all mainstream news for a week (ie. TV news, newspapers, news websites, radio, etc). I have the sites bookmarked on my bookmarks toolbar, and many times I was tempted to click them, although never going through.

Here's a list of some of things that I accomplished:
-studied the bible a bit more
-finished Chris Jericho's biography, A Lion's Tale
-started on a book on economics called The Accidental Theorist by Paul Krugman
-played more guitar
-searched for jobs
-caught up on a bunch of movies that I never got around to (some new ones and some revisits)

It seems like I'm missing a few things (which may be the case, it's late right now), but I think those are most of them. There were long stretches of boredom where I'd just lie down and think about life. Thinking back at the week now, I don't even know where all the time went.

The fast came to end at an appropriate time; I planned ahead before the fast to visit my friend Skylar over in Waterloo (about 1.5 hour drive west from Toronto). Our friend Ben, who was in town as well joined us and it was good times in catching up with my brothers in Christ. 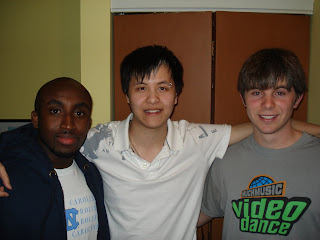 My brutha brother Ben, me, and brother Skylar. He looks tired (tired of pwning n00bs!).
We talked about all sorts of stuff, ate some burgers (Montreal steak sauce is the key apparently, [they ruled Skylar!]), and then got down to business... Warcraft 3: Frozen Throne. We own3d some with Wintermaul War maps and then got pwn3d in playing several games of DOTA. This lasted 6 hours straight, finishing at around 3 in the morning. It felt good being in the company of my brothers who I don't get to see too often, a glorious way to end a week of fasting. 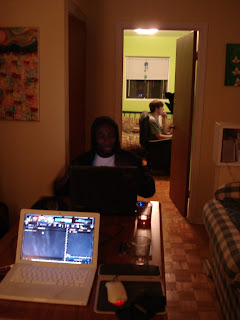 Our 3 man setup. I was on the Macbook and had to use the Map-Bypass-Theorem to properly load WC3.
Anyhow, that's it for now, I'm pretty tired from the intense epicness of last night. Until next time, later geeks!