TV: Kings and Eastbound & Down

April 15, 2009
Two new shows that have really caught my attention this season are Kings and Eastbound & Down.

Kings is a modern day retelling of the story of David from the Bible. It takes place in a fictional city called Shiloh within the country of Gilboa who are at war with the rival nation, Gath.
The story focuses on the ruler, King Silas and his family as they deal with all the issues of being in royalty and the public eye. There's a struggle for power and each member has his/her own personal agenda at the top. A young soldier named David is introduced and shortly after becomes a hero for taking down some "Goliaths" and saving the King's son from the Gath army. David becomes beloved by the Gilboa nation and is skyrocketed to celebrity-status. The story then focuses on David's eventual ascension to power and his headbutting with the current King.

So far, the story stays pretty true to the Bible, but of course some artistic liberties are taken. If you're at all familiar with the story, then you pretty much know where things are going, it's just how they get there that causes the intrigue.

The show stars Chris Egan (who bears quite a resemblance to Matt Damon) as the hero soldier, David Shepherd. He does a pretty good job as our immaculate hero and holds his own with other heavyweights on the show. The ultimate bad-ass, Ian McShane (of Deadwood fame), plays the illustrious King Silas and he's everything you would imagine him to be in this role. His level of acting clearly stands out from this show's ensemble.

What I love about the show is the dialogue. It's in modern english, but there's a certain flair or characteristic about it that makes it unnatural, almost as if you were watching a David Mamet play or something. It helps to keep the dialogue sharp and the characters sharper.

Catch it on NBC on Sundays at 8pm. There's a good chance that the show won't get a second season due to the lackluster ratings but it's still more original than all those police-drama-shit shows that seem to fill up primetime television. 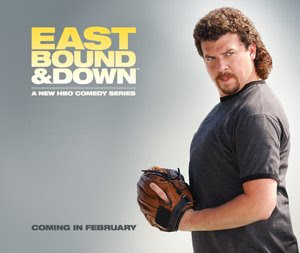 The awesomeness of Danny McBride continues in Eastbound & Down. Following his acclaim in 2008's The Foot Fist Way and Pineapple Express, McBride
finds himself as the frontrunner in this show as a former major league baseball pitcher, Kenny Powers. He resides with his brother and his family in a smaller town, as he takes a job of being a substitute teacher. The show follows him as he tries to train and make it back to the major leagues.

The show's collaborators include Jody Hill, David Gordon Green and Will Ferrell (who also makes a few appearances as a Ric Flair-like car salesman named Ashely Schaeffer). If you're at all familiar with their style of comedy, then you'll know what to expect with EB&D. It's vulgar, raunchy and juvenile all at the same time... there's no stopping the Kenny Powers express.

The first season finished in March and is only 6 episodes long, so it won't take you long to get through them all. So far, all of my friend's who I've recommended this show to have loved it. And the good news for fans is that last week HBO renewed them for a second season.

If you're internet savvy at all I'm sure you can find either of these shows on some website. Check either out if you have time. Later geeks.

Eastbound and Down clip: