The adventure to Adventureland!!! 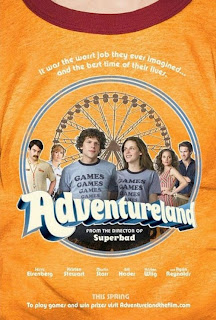 When I was 16, I worked at Canada's Wonderland, the amusement park here in Toronto. I worked a bunch of the food stands/booths; booths where you bought slushies or snow cones or ice cream, and even a few popcorn booths. Those days were so slow; imagine 8 hours standing at a booth selling people shit. Man, I don't know how I did it. There were a few games that I played by myself to pass the time. One such game was to do my best to not look at my watch, and see how long I could last (I don't think I did better than 3 hours at my best even though it felt like 8). Another one I tried was to see how long I could fall asleep for before getting caught (I had sunglasses on to avert any attention). I was never caught, but the naps were no longer than 10 minutes at the most. And of course I'd oggle the tightly-clad teens whenever they'd pass by. The best was when... wait... I'm not gonna tell that story. Hey I was 16, I was raging with hormones. Ahhh, the memories.

Anyhow. What was I going to talk about again? Ahhh yes, Adventureland.

Adventureland follows a group of young 20-somethings as they work through the summer trying to make money for the upcoming college semisters. We mainly follow a young man named James, who had to bail on a trip to Europe because of the lack of funds, ends up moving away to Pittsburgh and picks up a job at an amusement park, so that he has enough money for grad school. He goes through all the mundane motions of working at the park, when his attention turns towards a fellow co-worker named Em. All the other guys at the park drool and long for a buxom young girl named Lisa P., but not James. James has his eyes set on Em, because she is witty, more mature and seems real, all things considered. The movie explores their relationship and all the ongoings at the park, and how every little incident affects everyone around them.

This is Greg Mottola's sophomore theatrical release, a follow-up to his 2007 hit, Superbad. If anything, Adventureland proves that Mottola is a great story teller and one who is able to draw the emotions out of the viewers to care for the characters. Characters make mistakes and we feel for them, we don't blame anyone because we can see it's a shitty deal for everyone. There are no heroes or bad guys in this movie, just people living out their lives.

The trailers for this movie fooled me. I was expecting some raunchy, dirty filled comedy. I wish they didn't market this movie as that kind of comedy, because instead its focused more on its dramatic side and is more of a thoughtful film. There are lots of funny moments scattered amongst it's 102 minute runtime, but I think the movie is more concerned with showing this piece of life, how it's like as a young 20-something year old.

Jesse Eisenberg took on the lead role as James. Admittedly, I haven't seen any of his other movies, but I found that he was able to bring the charm out of this character, so it was all good. The only thing that seemed awkward to me was that either his character or his performance seemed to be emulating Michael Cera (in any of his movies), and so I have to wonder if this role was originally written for him. Kristen Stewart of Twilight fame was quite the fetching young lass as Em. She was perfect in this role, and I couldn't think of another young actress that could have filled this part as she did. She just has that spacy or stoned look in her eyes that worked for her character. SNL's Bill Hader and Kristen Wiig played the two zany amusement park owners and were the only two truly funny people in this movie. The few scenes they were in were pure gold.

I really enjoyed this movie, it had a feel good feel to it. I will say that I didn't enjoy it as much as I'd hoped to, only because I was convinced that it was going to be this laugh out loud comedy (that's not to say I didn't enjoy it though, far from). I'm going to pick it up on DVD when it comes out, and I have no doubt that it will grow on me after repeated viewings. You can view the trailer here (Youtube / Quicktime). Later geeks!

Kevin said…
Woah- you worked at Wonderland? I actually applied there this summer, but alas, no success.