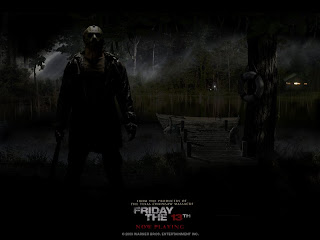 After a few weeks of delay, me and the boys got our act together to witness this spectacle in film making. Yes, Friday the 13th... the remake! Well, it's not really a remake at all, more of a reboot. The story of the original F13th is summarized in the first 3 minutes, and with this movie, it akins more to an alternate take on parts 2 & 3 together, ie. concentrating on Jason.

The story focuses on a dude named Clay who is searching for his missing sister in the Crystal Lake area, the place she was last known to be in. He comes across a group of young debauchers, who don't really care, except for one girl who happens to be a main douchebag's girlfriend. Oh yes, and Jason is lurking in the woods with his trusty machete.

That's all you need to know, you can guess the rest.

Jason does a pretty quick job of dispatching the pot smoking, bed romping no-goodniks. Usually in slashers, they'll introduce you to a black dude, and you just know that there's no way in hell the brother's getting out of this adventure alive. This time, not only do they introduce a brother, but a chinese dude as well. I just thought, "oh boy, how did my asian brother get tied into this". I'll give you one guess as to whether he survives.

Near the end of the movie, it comes down to 3 survivors: 1 guy and 2 girls. Now, the Horror Movie Law of Ratios tells us that this cannot happen. The ratio must be either 1:1 or 1:0 (for either sex) [side note: I think the only movie I've seen that actually ends breaking this law is Leprechaun 4 - Leprechaun In Space, where 2 men and 1 girl lives, and one of the men is a black man in fact]. Anyhow, it's quite a conundrum because neither girl really deserves to die. Neither were sleeping around or consuming narcotics, and both were generally nice girls. But in the end, Jason makes the tough choice for us. He knows how to obey the law.

The only minor complaint I have with the movie was that I wish he had used more ingenuity with the kills. Most of the kills are old hat, nothing you haven't seen before. And in a slasher movie, that's what it's all about: the kills. Nothing here is too creative, but there are 1 or 2 that are fun (our arrowed friend and our poor bear trapped friend).

I also hope that they would create a companion film to this movie, maybe for the DVD release, from Jason's perspective; a movie that just shows him doing mundane things, because I think that would be interesting in its own way. I mean in this movie, we get to see his home and all that cool junk he has lying around, I'd like to see a movie where he plays with that stuff, takes a nap or goes for a ride on the bike, because I really don't think he's training to kill people 24/7. Also, the sister in the movie is kidnapped for a month which would imply that Jason sustained her life by feeding her and taking care of her. I'd like to see scenes of him cooking and the kinds of foods he likes to eat. The guy must have some pretty wacky recipes because he's 300 pounds of pure muscle. Instead of killing, maybe sell that recipe to the world and rake in millions instead?

After watching the movie, me and my friends came to the conclusion that Jason must have been trained in the art of ninjitsu. There's no other possible explanation how this near 7 foot and 300 pound man could possibly move as covertly as he does. He's like a human panther or something.

We also concluded that this movie must have been sponsored by Abercrombie & Fitch because all the characters looked like those douchebags in their store posters. They fit every stereotype you could think of when you see them at an A&F or Hollister store. However, this just added joy for us as one by one these scoundrel's were slayed.

A good time was had by me and the boys. The theater was mostly empty, and after each kill, our group erupted in laughter, clearly a sign of triumph on the movie's behalf. Check it out you gorehounds! Later geeks!

Beka said…
Conversation with Keith when he picked me up after work and he was done watching the movie:

Mike said…
As a big Friday fan as well i came to the same opinion as yourself. Good movie but wished the kills had been a little bit more creative. Kudos for the T&A though, the best bods & boobs in a Friday film ever.

As one fan to another you might wanna check out the recently released documentary "His Name Was Jason: 30 years of Friday the 13th". Has plenty of great interviews with all the directors, actors and fans of the films.

The Lam said…
Hey Mike, thanks for the post. Hopefully they use more of their creative minds on the sequel. Jason was always such a resourceful guy, I'm sure he can use anything as a weapon.

And yes, I saw that documentary, it was fun to see all the actors reminisce about their F13th experiences.
March 9, 2009 at 7:09 PM