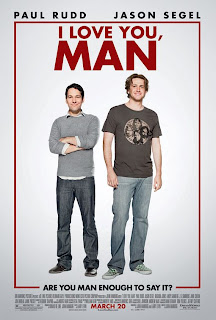 According to Urbandictionary.com, a "man date" is defined as: Two "straight" guys doing something that would be your standard date, eg going to a film, out for a meal.

So it was only fitting that I went on a man date to see a movie about man dates.

I Love You, Man is about a real estate agent named Peter who is newly engaged, but comes to the quick realization that he has no close male friends and therefore, lacking a Best Man at his own wedding. Peter then goes on a series of man dates seeking male companionship and is pretty much down on his luck until he meets a guy named Sydney at one of his open houses (the home of The Hulk, Lou Ferrigno). However, as Peter and Sydney bond closer, his relationship with his fiancee Zooey begins to draw some distance.

The movie ended up being only 'okay'. You'd think that given the subject matter, that they would have aimed to produce an R-rated comedy. Instead, we get a very 14A comedy, and the watered-downess is clearly visible here; all the jokes are pretty tame and safe. The movie was pretty funny, but not laugh out loud funny (or not enough I guess). The best parts of the movie for me was all the comedy relating to Zooey's friends (ie. the tension filled couple and the single 30's female friend). I almost wish that the movie were about them instead. The movie itself starts off kind of dull and typical, but as soon as Sydney is introduced, it's like a whole new flavour is added.

I think if this movie were in the hands of the Apatow-crew that it would have been a knockout. I saw all the positive reviews beforehand and I assumed that I was in for another Forgetting Sarah Marshall.

If anything though, this movie proves that Paul Rudd (as Peter) is more than capable as a leading man, rather than a supporting member. If you've seen him do the late night runs, then you've seen how funny he can naturally be. Jason Segel (as Sydney) is quickly becoming one of my favourite comedy actors. Sarah Marshall was the first time I was "exposed" to his work, and in this movie, he's clearly the saving grace.

Anyhow, check it out if you want a light-comedy. It's not too raunchy (perhaps at least not to my standards) but its still fun for what it is. Later geeks.