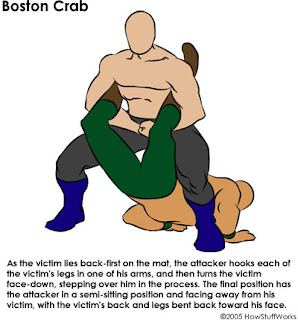 If you're a subscriber to F4Wonline (and I know at least one of you are), you'll no doubt have heard our chief and emperor Bryan Alvarez herald this week as one of the worst week's in professional wrestling (that stemming from the big two, WWE and TNA). In fact, former wrestler Lance Storm weighs his two cents on the whole deal on his own website (here). While people would say that TNA produced the worst show this week (undoubtedly bad), I would have to disagree and say WWE is the huger disaster. I say this only because WWE is a publicly traded multi-million dollar revenue company and worldly renowned, thus having a larger magnitude in the grand scheme of things.

So let's start off with the WWE. Last Sunday going in to the Royal Rumble, they couldn't get any hotter than they were with three really strong angles; the JBL/Michaels/Cena angle, Edge VS Jeff Hardy with his hinted stalker being revealed, and Randy Orton's superstar domination... the latter two of which they ultimately fucked up.

In the Edge and Jeff angle, it was widely known that it was none other than Christian who was tormenting Jeff over the past few weeks, and the Rumble would have culminated with his return to the WWE. If you watched the Rumble or any of WWE's shows this week, then you will have learned that it was not Christian, but rather Jeff's brother Matt. Yup, Vinnie Mac swerved the audience. According to Dave Meltzer of the Wrestling Observer Newsletter, it was a last minute switch to Matt instead of Christian because Vince McMahon felt that too much people knew and were expecting Christian. Apparently Vince wanted to outsmart the smart internet marks. Assuming that it was Matt all along, the storyline makes no sense. Why would Matt as the jealous brother help Jeff win the world title in the first place? If you review the past 3 or 4 months of storylines involving you would see that it makes no sense.

But let's cut in a little deeper with some simple arithmetic here. If we assume that in America there are 300,000 marks (I'm trying to be generous to bend the numbers in favour of WWE) and approximately 6 million WWE fans based on the Raw ratings (fanbase probably much larger but again, I'm trying to bend it in favour of WWE), that would mean that WWE wasted a perfectly good angle just to swerve 5% of the audience, thereby punishing 95% of its audience from a good storyline. Not only that, but Matt was so over with the audience already. He was the leading babyface of the ECW brand (granted that doesn't mean much) and very over in his own right. But now that he's a heel, doesn't that decrease all his merch sales? I mean, that just sounds like a bad business model for the WWE (perhaps analogous to a smaller scale Steve Austin heel turn). Kids just don't like buying the heel merch.

They followed up the gawd-awful swerve with a ridiculous promo on Smackdown! this past Friday. It was a bad promo in delivery and design, and the cherry on top was that they played this evil music as background music while he was cutting it. The ultimate cheese effect. THANKFULLY though, the saving grace was that they kept things open for a Christian return as Matt claimed there's no evidence that he did any of that shit to Jeff, but there was evidence that he turned on him at the Rumble. Hopefully they pull the trigger on Christan at No Way Out in two weeks.

And now with Randy Orton, my favourite wrestler on the Raw brand. He went in and out of the Rumble show with so much momentum, and they destroyed it on Monday night. Not only that, but he and his fellow Legacy members, Cody Rhodes and Ted Dibiase Jr., were taken down a notch too. Shane McMahon made his return, and I'm not quite sure what he was trying to do, but the idea was that he was kicking the shit out of everyone because he was pissed off. I think he was trying to channel Steve Austin, but if you rewind it and watch it again, you can't tell what this man is trying to do. Let's think about this. Shane McMahon, the 39 year old non-wrestler/non-fighter, took out 3 young wrestlers on his own. Lets not forget that the night before Triple H (self proclaimed king) himself could not take out this faction because of their momentum. And if we think back a few more months to Survivor Series, Dave "The Animal" Batista, couldn't even take out two of them at the same time, that being Randy and Cody. So we're to believe that mild mannered Shane McMahon is not only much stronger than Triple H but even THE ANIMAL himself?! Bullshit.

Well, we'll see how they follow up the disaster that was last week on tonight's Raw.

This post went a few words too long and I didn't get to TNA. So in short, it was a complete bury-fest. Watch it for 15 minutes if you want to laugh, but then turn it off right after.

The Cheap-Arse Film Critic said…
The events of the last week have left me with my jaw on the floor. It's like someone somewhere has decided professional wrestling is evil and must be destroyed.
February 2, 2009 at 1:27 PM

The Lam said…
My sister (a non-fan) watched the Shane McMahon segment on Raw and the Matt Hardy promo on Smackdown. She laughed at the ridiculousness of it all, that's when I knew trouble was a-brewin'.
February 3, 2009 at 6:18 PM