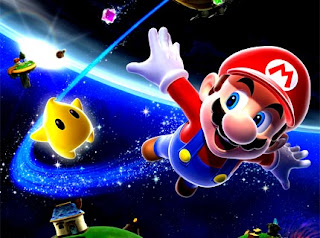 Our favouriate Italian plumber soars in his latest platform adventure out for the Wii. Traditionally, Nintendo excels at the platform gaming genre and Super Mario Galaxy does not disappoint.

If you're familiar with the other Mario platformers, then you'll know the story: the evil Bowser kidnaps Princess Peach and its up to Mario to save her by hurdling through level after level. Nintendo doesn't deviate too much from this formula this time around. Clearly their Mario-platformers are all about the gameplay and not the storylines.

This time around, Mario is flying, jumping and twirling through planets and galaxies in hopes of collecting stars to open the way to his beloved Princess. In his adventure, Mario encounters all sorts of creatures, some friendly and some mean, and all sorts of environments, some heated and some frigid.

Galaxy never gets tired thanks to the variety of levels and all the different tasks that need to be completed. It's a far different Mario game than those of the old, where you start at A and head to B. This time around they shake things up a bit by mixing in levels where you have to race, where you have to hunt for different parts of a full star, and a slew of mini-games with a star to reward you for your efforts.

In total there are 120 stars scattered throughout the galaxies, hopefully enough to please the completionists out there. At the time of completion I had 80 stars, so there's still tons for me to do.

Nintendo takes advantage of the Wii-mote's technology by having you shake it to perform different functions for each level. It's a bit cheesy actually. If you think about it, the shaking of the Wii-mote to perform a function could be completely replaced by using a button to perform the same action. But they make you do so many different things all with the same hand motion that it seems to offer a variety. Well, it's still fun though.

Probably my favourite aspect of Galaxy is its soundtrack. Composed by Mahito Yokota and Koji Kondo and performed by "The Mario Symphony Orchestra", the scores are brilliant and often pleasing to the ear. One can't help but get a feel for an epic adventure when the orchestral music hits.

Anyhow, I loved this game. It was beautifully designed and tons of fun to play. Definitely worth checking out if you have a Wii. Later geeks.