My Bloody Valentine in glorious 3D! 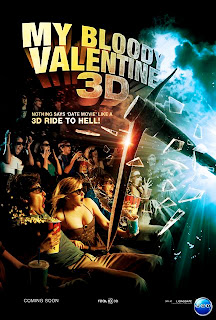 What a movie. What a MOVIE! Okay, this movie was in no way great. It was good for what it's worth, but compared to other slasher legends, this one is just another run of the mill horror flick. What it has going for it is it's gimmick. It's all about the gimmick! I have no doubt that were this not in glorious 3D, that this would go straight to DVD.

This movie is boasting that it's the first rated R movie to be fully in 3D. I suppose all the ones in the 80's don't count because they weren't fully 3D. I have to admit, the use of 3D in this movie is fun, and in the end, is what saves this movie from complete disaster. Body parts, blood, and boobs are always flying at you off the screen, making for an enjoyable time at the cinemas.

I'm not going to go through the plot because, well, slasher's are hardly ever about the plot. It's all about the kills. "A killer is on the prowl in a small town, killing off the townsfolk left and right". There. Tag that on to any slasher flick. Our killer in this movie is a supposed disgruntled miner named Harry Warden. He wears a thick suit, a gas mask, and sports a pick-axe to boot. He's passable as a killer. I mean, I guess it'd be scary if he just popped up in your house uninvited.

What the film really lacked were characters that we could care for. All the characters were pretty much assholes. With the exception of the main girl, they all had it coming.

As a slasher fan, I would have appreciated some ingenuity with the kills. There are arguably 2 fun kills, but they're all hampered by the fact that all the kills in the movie were done by a pick-axe. I think that's why Friday the 13th is my favourite series. That bastard Jason Voorhees is one clever mother fucker. He comes up with all sorts of ways to kill people, from party whistles to sleeping bags.

One of the most over the top scenes was this 5 minute scene with Betsy Rue baring her all. Now, as a Christian man, I can't go as far as to glorify the scene, but just to think of what this adds to the lexicon of modern cinema amazes me. It's over the top and hilarious which is why I think it works. Judging by the crowd reaction during the scene, I'd say it was a fan favourite. If it was meant to be erotic rather than funny, I don't think it would have garnered the same reaction. I have to give Betsy Rue all the credit, she is one bold girl. She's not afraid to bare it all and apparently is not afraid of the cold one bit.