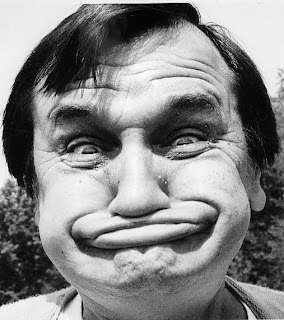 See the guy on the left? I feel exactly the same way!

So yes, 2009 has come and gone. It seems like yesterday that the year just started. How time flies. It was a strange year this past year for me. Life just felt like it was in stasis. I've been doing a lot of reflecting these past 2 weeks and during this time, a lot of things have been revealed to me, be they realizations of new ideas or reminders of old.

Two weeks ago, I was at FreeChurch on a Monday night to help a group called Light Patrol (who work with street youths) who organized a free meal for the community. I along with a few friends were there to lend a hand with anything they needed done. Thankfully, there were tons of volunteers on hand from their side, so it gave us a lot of downtime before the closing/cleanup which we would help with. During this time, me and my friends Justin and Jon talked about a bunch of life stuff. I was telling them that life just felt like in stasis. But it's not an overwhelming feeling; I'm not to the point of feeling sad, depressed, emo or anything of that sort. Rather, I know I'm stuck, but at the same time I can see that glimmer of light and hope at the end of the tunnel. I can see myself full of joy on the other side of this hump. I see the hurdle that's stopping me and I'm just trying to figure out how to jump over it.

Like any good conversation with trusted brothers, we also talked about relationships, girlfriends, and that sort of stuff. As it stands now, I'm content with where I am (refer to this post) at least for now. I'm in that phase in life when you're not looking for anyone but at the same time you're looking at someone. Does that make sense? It's like you're not ready to start something new yet but you can't help but notice that there's a cute girl in the corner of your eye. It's funny, in talking with a few different groups of friends these past 2 months, it seems like everyone else is really aching to find someone. And these are all young men who have their whole lives in front of them, with nothing to rush at all. For me right now, I just don't feel the urgency to start anything. Perhaps it's my sense of patience taking over. I know I've got to get my shit in check first. And by getting my shit in check, I'm referring to that hurdle again.

Which brings me to the idea of patience. For years I've known that patience was my strongest suit. It's not only something I've realized myself, but it's something that's been pointed out to me by my friends as well. I've been thinking about what God's been trying to teach me during this past year and I think He's trying to tell me this: "So you think patience is your strongest quality? We'll see about that." And so this past year has been a lesson on patience. When I compare myself of this year to year's past, patience has notably weakened. For example, with my gaming habits. In the past, never have I been so angry or frustrated with a video game that it makes me raise my voice, yell, swear and/or curse at something that's nothing more than a piece of inanimate software. Not until this year at least. Sometimes it even scares my mom when she sees me gaming, as she knows a barrage of swear words is coming. Lately though, it's been improving. I'm really forcing and reminding myself that it's just a game. Sometimes I'll forcibly have to pause (or completely end) the game to breathe in and collect my composure. I think patience is such an important quality where in our "on-the-go" world, it's been made more rare and invaluable. I'm doing what I can to strengthen this quality because I know it'll pay off in the end. And I know it'll help me get across this hurdle.

I've been alluding to this hurdle the whole time without mentioning what it is. Well, it's no secret or anything; my hurdle right now is unemployment. Like 10% of America, I've been job searching the past year. But I think I entered 2009 with the wrong frame of mind. I was job searching, but I wasn't really putting full effort into it. I was applying to jobs blindly without a care as to what I was doing. But fortunately I gave myself a swift kick in the butt mid-Summer and have been more focused since then. And on top of that, I forgot one of my dreams/goals that I had 3 years ago until two weeks ago. I was applying to a Water/Wastewater Treatment Engineer job in Toronto and I was reminded of this dream. Three years ago after reading Shane Claiborne's Irresistible Revolution, I felt inspired to use my school smarts for some good purpose. My idea was to work somewhere in the clean water industry for a little a while, learn as much as I can and basically strengthen myself in this field. I'd then take my new found knowledge and skills and apply them to maybe an organization like Engineering Without Borders or at least an organization that seeks to provide clean water to those countries that lack this resource. That was the dream. Somehow during these past few years, I lost track of that goal and it may have played a part in my lack of motivation. Now, having once again realized this dream, I feel much more confident going into the new year when applying to jobs (water related or not).

So that's pretty much what I've been reflecting on this past month or so. I feel like I'm forgetting a few things, if so, I'll just have to make them a separate post. Moving forward in 2010, I feel much more happier, focused and determined. There's a whole lot that I'm looking forward to and I know I'll have tons to learn from all those people around me. As my friend Beka said to me yesterday, "2010's the year Jeff, for a girlfriend and a job". To which I said yes, but preferably in reverse order :)

Tune in on Monday for a post on things that I'm looking forward to this coming year.

Thanks to all you loyal and casual readers alike. Whether I know you or not, I consider you all my friends and only want to wish you the best, especially after wasting time on this geek's blog. Have a great new year!

SkyCapitan said…
Jeff it's very interesting to hear your reasoning for wanting a career in water. My reasoning for sticking with my current engineering discipline was similar. It just feels better at the end of the day when your daily job helps to provide people with safe drinking water and sanitation.
January 2, 2010 at 6:33 AM