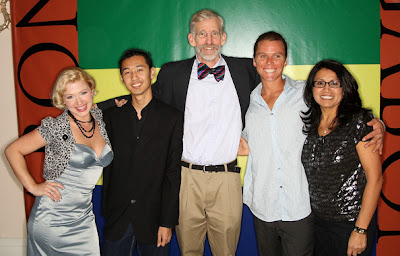 Last night was the finale of Survivor: Gabon, and a bit lackluster if you ask me. So my three original choices from episode one were Kenny (The Gamer), Crystal (The Olympic Gold Medalist), and GC (The Token Brotha). Of my three choices, two of them made it to the final six, so not bad. Unforunately, neither of them would comprise the final three survivors.

The final four comprised of Sugar (The Pin-Up), Bob (The Physics Teacher), Susie (The Invalid), and Matty (The Workhorse). It was so clear that if Bob made it to the final three, that he would win the million dollars as the jury was made up of people from his old tribe, and clearly people who would not vote for Sugar and Susie. The last elimination vote basically came down to Matty or Bob leaving. Originally, they were unanimous on voting Bob out, but for whatever dumbfuck reason, Sugar, who I think is clinically retarded, decides maybe she can vote for Matty bringing the elimination to a tie. Wait a second. What the fuck!?!??! It made me angry to watch this. What the flying fuck was she thinking!?!?!??! Did she forget who the jury was? At least if she kept Matty on, she would have an even chance, I mean none of the jury really liked Sugar, Matty, or Susie. By keeping Bob in sealed her fate.

So the vote went to a tie, sending Matty and Bob to a fire making challenge to break it. Bob won. And yeah, in the end, Bob won the whole thing.

The final votes? 4 for Bob, and 3 for Susie. I have no doubt that those Susie votes are only because the jury members neither wanted to vote for Bob or Sugar, so it was the default choice. And, I bet that if Matty would have stayed, he would of won.

So Bob, the 57 year old physics teacher is a new millionaire. Well, if anything, I guess he deserves it, he played a good game. I was still rooting for Kenny though. Fuck that Sugar, screwed'em all!

Beka said…
I didn't watch this show at all this year...I remember when the show first started and I thought, "what?! They can't do that. They can't drop people on an island and film them and see how they survive!" But then in came reality TV as we came to know it.

The Lam said…
I loved it the best when it first came out. It was the same summer that I worked at Wonderland, and I remember the day after every episode, we'd all talk about it while making cotton candy. Fond memories.