Rourke pwns in The Wrestler 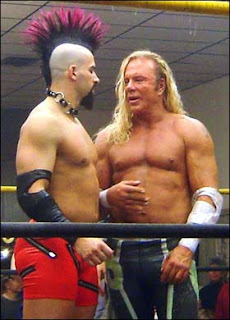 This post will be divided essentially into halves with the review and analysis. The review will be a typical affair while the analysis will be unleashing my inner geek on the movie.

If there was one movie that I was meant to see this year, without a doubt it's Darren Aronofsky's The Wrestler. This movie is a beautiful merger of two of the things I love - movies and prowrestling. Is it my favourite movie this year? Well, that's yet to be determined.

With The Wrestler, Aronofsky has raised his own bar in crafting the tragic portrait of a professional wrestler. It's not about the glitz and glamour that one would come to mind when thinking of such superstars as Hulk Hogan, The Rock, Steve Austin, but rather about those forgotten stars who faded away in the 80's.

This is the role that Rourke was meant to play if for no other reason than that his own life parallels that of his character Randy "The Ram" Robinson. They were both shining stars at the peak of their careers in the 80's, and as soon as the 90's hit, their light quickly faded away. The movie and the reality behind it is a story of a man's journey in keeping that light alive. Make no mistakes, this movie is the Mickey Rourke show.

Marisa Tomei (who is absolutely STUNNING at age 44) plays a stripper named Cassidy who Randy befriends. She does an excellent job of playing a bitch who seems remorseless to a more sentimental single mother. Unfortunately, the number of scenes with Tomei are limited. It would have been good to develop this angle more.

Evan Rachel Wood plays Randy's distant daughter and much like Tomei, her scenes are limited. Apparently, the storyline of this relationship was modelled after the relationship that Jake 'The Snake' Robert's has with his daughter shown in the wrestling documentary Beyond the Mat.

On that note, I don't believe there is one particular wrestler that Randy is modelled after, rather its an amalgamation of wrestling veterans and their personal stories. Some names I've heard thrown around were Jake Roberts, Greg Valentine, Terry Funk, and so forth.

Prowrestling is a strange world. You can go from being known worldwide and wrestling in sold-out stadiums to becoming a Joe-schmo nobody wrestling for a few measly bucks in a bar or school gym... all within a matter of years. It's a sad reality, and I must say Aronofsky depicts it well and with much respect towards the psuedo-sport.

Of all of Aronofsky's "mainstream" movies, this one clearly stands out with its more conventional style of storytelling. As compared to Pi, Requiem for a Dream, and The Fountain, this one is certainly more visceral while the other three are more cerebral.

The movie deserves a bunch of Oscar nominations if not the win. At the very least, I hope they get the nod for Best Actor, Picture and Director.

I'm going to go switch the gears onto geek overdrive in this section... beware of mild spoilers.

The relationship that Randy has with Cassidy is interesting in that both of their lives mirror each other, albeit in different professions. Both are entertainers who find a strange type of respect with their fans and customers, but outside in the real world, they find that they are lost and uncared for.

There's also a scene that they have at a bar that clearly represents them both. They have a conversation about music and how it ruled in the 80's, but as soon as the 90's hit, everything started to suck... much reminiscent to their lives.

I have many favourite moments in the movie - moments where you could pause the movie in your head, take a snapshot, and let the picture speak a thousand words.

One such scene occured after Randy had a hardcore match with the Necro Butcher. The match was brutal, bloody and violent. We then get a shot where Randy is sitting by himself in the empty locker room with his back towards the camera and his head buried in his hands. We get to see all the scars, cuts, swellings and scabs from the match he just had. The image speaks for itself, and you can tell he's asking himself "why the fuck am I doing this shit?".

One of the sadder scenes takes place at an autograph signing session. It is clearly a failure. You see a room full of wrestling veterans sitting by themselves trying to sell their goods to the four or five people or so that show up. On a bunch of tables you can see they're trying to sell VHSs, not even DVDs. The symbolism with the VHS tapes is interesting because like these wrestlers, they are a product that belonged in the past.

Oddly enough, my favourite moment in the movie is one where we don't see anything at all. It happens at the end of the movie, when the screen fades to black as Bruce Springsteen's song "The Wrestler" hits. There is an extended period of blackness as the ballad plays. It's a beautiful song written by Springsteen specifically for this movie and as a personal favour to his friend Mickey Rourke. It's a peaceful moment that allows the viewer to take in the movie along with the song that plays, which fully describes Randy's career. A triumphant end to a triumphant movie.

"These things that have comforted me, I drive away
This place that is my home I cannot stay
My only faith's in the broken bones and bruises I display" -Bruce Springsteen; The Wrestler

GGBlog said…
I agree that Mickey Rourke and Marisa Tomei are AMAZING in this film. I have posted some thoughts here.