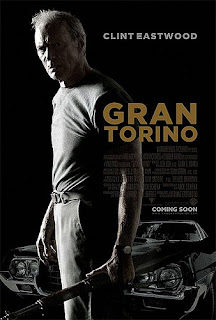 Clint Eastwood's latest effort, Gran Torino, is quite a visceral powerhouse. He again proves why he's a master at his art in both directing and acting.

The story follows his character, Kowalski, who is a hardened and calloused veteran who comes to grips with his mortality (note: I wonder if his name is in reference to Killer Kowalski, the great wrester of the 50s to 70s). He grunts and groans through half the movie, and who could blame him for being so grumpy... even his own kids treat him like shit. He begins to take down those walls after becoming friends with a young asian boy, Thao, a new neighbour of his. He makes it his goal to teach this boy how to become a man, and it's through this relationship that Kowalski becomes mixed up with the local ruffians that terrorize the neighbourhood.

The trailer was a bit deceiving. The whole time I was expecting to see an hour and a half of Eastwood kicking some gangland ass, but this was not the case. Don't get me wrong, he does give the gang members an ass kicking, but most of the movie deals with building his relationship with the young boy.

Eastwood is a man that understands his craft, specifically, he knows how to draw emotion out of his audience. The key to this is character development. Regardless of if a story is complicated or simple, if you don't give us a reason to care for the characters, we won't give two shits about the story. In this case, the story never feels tired; at times its funny, serious, and sad.

My only real gripe with the movie was the acting. With the exception of Eastwood who was superb, the acting all around was pretty horrendous and even laughable at parts. The cast was made of mostly unknowns perhaps too inexperienced in these roles. Still, Eastwood's acting saved the movie by far from becoming an acting disaster.

One last thing of a more personal note. As I was watching the movie, I couldn't help but be reminded of my friend and former pastor, James, as well as my friend DaYue. Their relationship is similar to that of Kowalski's and Thao's; James gets DaYue to help with chores and stuff around the house, teaches him how to be a man, and counsels him... and I'm sure in the middle of it there's guns, cars, and gangs in there. The whole time I was watching them interact in the movie I was saying to myself, that's James and Yue! Even Thao's mannerisms are similar.

Anyhow, I say check it out if you can. You can see the trailer (here). Later geeks.

I read your blog one day 'cause I was a little bored and curious and came across this review and it convinced me to watch this movie. I just did and I wanted to say that you hit it spot on! I found it was touching and I felt I learned a lot from it. Thanks for the great review and movie recommendation it made my day.

The Lam said…
Thanks a lot Andy! I appreciate the comment, and am really glad that you enjoyed it! Few movies these days touch me the way Gran Torino did. Take care bud!
December 26, 2008 at 7:42 PM