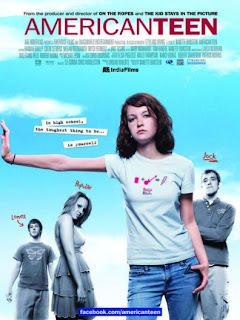 Two documentaries in a row. Although Man on Wire is being touted as a favourite for an Oscar nomination and win, I much more enjoyed American Teen, one of the breakout films at the Sundance Film Festival earlier this year. By no means is this a great film or one that inspires hope like Man on Wire does, but this is still a damn enjoyable movie.

The movie focuses on four teenagers in Warsaw, Indiana as they go through their final year of high school and of course we get to see all the drama that's related with it; there's the geek who's trying to find his true love and his identity, there's the artistic tortured soul who seeks to escape Indiana to live out her Hollywood dreams, there's the jock that lives with the pressure from his overbearing father, and finally the blonde bitchy "princess" who's the grade-A drama queen.

That's all you really need to know as most of the joy is from watching their lives unfold. I guess it's similar to a lot of the 80's teen comedies (people have been comparing it to The Breakfast Club) except for the fact that it's real*.

It's a movie that's easy to enjoy mostly due to the personal investment you have in the characters. I don't think it's hard to find someone in this movie that they can relate to. You find yourself really rooting for these teens as they go through all the heartache's (for me, in particular, the artistic girl).

I think I felt somewhat of a connection to the movie as I was pretty close to this town during summer when I was in Goshen, Indiana which is only 45 km away (28 miles for my American friends). The two communities are quite similar; predominantly white, mostly Christian, and middle class. I don't know if it made it anymore real*, but the connection certainly made it much more interesting at least.

The only real beef I had was that it was so clear that heavy editting was used to try and tell their stories. You can tell as in a sequence of segments, the teen's hair would be longer or shorter or different altogether, while acne was more prevalent sometimes and not.

Check out the trailer in glorious Quicktime (here). Until next time, later geeks.

(* Note: As can be expected with a production like this, it is no more real than an episode of The Hills. The trolls on the IMDB message board have outted the movie for all it's fakeness and forced direction. A lot of the students who were in the highschool during the production of this movie have also voiced their hatred mostly for ruining their senior year with cameramen and crews crowding up all the hallways and classrooms. Apparently a lot of the storylines were forced upon the teen subjects. While it is trashy and low-rent in this sense, I still find it an enjoyable movie.)