Generating my list of top 10 movies for this year will be interesting. I've seen so many movies this year, yet I'm finding it hard to fill out even a top 5. There's been a ton of 'okay' films this year, but nothing awe inspiring. However, having seen Slumdog Millionaire last night, I'm able to at least add another title to the top list so far. There's an Oscar buzz already about this movie, and it's quite justified, currently with an RT score of 92% and a Metacritic score of 87.

Before seeing the movie, I was expecting a straight up love story where a boy meets girl, boy gets separated from girl, boy searches for girl. And I guess for the most part, that's what we get. The trailers and synopses basically tell us this much, but we do get a lot more, something I wasn't expecting. Even though the main story is the boy meets girl story, I'd say more time is devoted to the story between our main hero and his older brother.

The movie starts with the main character Jamal, being tortured by the police on suspicions that he's cheated on the Indian version of the gameshow Who Wants To Be A Millionaire. He is interrogated by an inspector and his rotund sidekick, and it's to them that Jamal reveals his life story and how he came to know the answers to each of the questions on the show.

From here, the majority of the movie is shown in flashbacks of Jamal's life. The movie is cut into three parts: childhood, teenage life, and young adulthood. The movie follows Jamal and his older brother Salim, as they struggle to survive as streetkids (or as they call them, slumdogs) on the streets of Mumbai. The contrast between the two brothers grows larger and larger as the story progresses and as the kids age; with Jamal as a humble boy and Salim as the older vindictive brother. They are joined by another orphan girl named Latika, and it's she who Jamal grows fond of, and eventually falls for.

A huge part of what makes us feel for Jamal is the amazing performance by Dev Patel, who plays Jamal in the "current" stage. Just the expressions he gives with his eyes tells us that he's an honest man. Thinking back to the interrogation, there's no reason why the inspector should believe his tale, but for whatever reason he does and tells Jamal that he believes that he's honest. 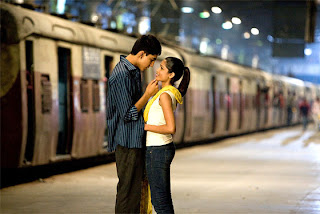 What's surprising is that a lot of these actors are first time actors mixed in with relatively unknown actors. I guess the mark of a good director is one that can pull out great performances from people who haven't had a plethora of experience.

The movie was shot beautifully by Boyle regular Anthony Dod Mantle (who also worked on Millions and 28 Days Later). Using Mumbai, India as a backdrop provided breathtaking sceneries amongst a cascade of rich colours.

The story could have easily been set in America, but I think it would have lost a lot of the charm that it had being in India. Mumbai becomes a character itself; it is vibrant, alive, and breathing just as much as our characters. You get to see the poverished and wealthy sides which seamlessly blend into each other.

This masterpiece proves once again that Danny Boyle is a versatile director; he can handle any genre be it a sci-fi epic, zombie-horror, or a heroin filled drama. If this movie is supposed to get the ball rolling on the award-season films, then I welcome it with open arms.

This movie is only open in select markets at the moment, but hopefully the word of mouth and strong reviews will help it get a wider release. If you can, go see this movie, and bring your loved one. You'll walk out of this one with a smile. Later geeks.

[Note: like any good Bollywood movie, there's a dance sequence thrown in there. It's quite awesome.]

8bitcity said…
I'm very hesitant of Bollywood after being forced to watch terrible, terrible BW movies in high school. Still, 28 Days Later had some awesome cinematography, so I'll try to hunt this down at some point.
November 19, 2008 at 9:56 AM

Unknown said…
I'm with 8-Bit City on the BW flicks, but have to admit Danny Boyle has put together some good ones over the years.
November 19, 2008 at 2:17 PM

Anonymous said…
I saw the preview for this I can not wait to watch it!