November 10, 2008
As we stroll into November, studios are slowly churning out their high profile films before the year's end in anticipation of the awards season. Here are the few that I'm anticipating:

Two of my loves combined into one: movies and wrestling. This is Darren Aronofsky's first feature since 2006. The Wrestler has been doing quite well at film festivals, including winning The Golden Lion Award at the Venice Film Festival.

What seems to be consistent is the rave reviews for Mickey Rourke's performance as Randy "The Ram" Robinson. People are lauding this as his best career performance, with a surefire hit at the Oscars. That would be quite awesome! What's interesting is that Nicolas Cage was initially supposed to take on this role, but scheduling conflicts prevented him from committing to this film.

Moriarity of Ain't It Cool News has called it Aronofsky's best movie... high praise considering he directed Requiem for a Dream, Pi, and The Fountain. The story uses more traditional storytelling methods as compared to his other works which were more of a mindfuck. This approach to the script should appeal to a wider audience as opposed to only the art-house crowd (or to just wrestling fans).

The wrestling action within the movie were shot on location at ROH shows, and I hear a bunch of their stars make appearances. The Necro Butcher (an ROH favourite) is supposed to be pretty awesome in it.

Unforunately, no trailers have been released yet, but keep your eyes open geeks.

The Curious Case of Benjamin Button

I was mesmerized when I first saw the trailer for this. It was attached to the Indiana Jones movie this past summer, and I remember the whole time while I was watching Indy, I was thinking of this movie. That shows you the power of a good trailer.

The crew is brilliant with a reteaming of David Fincher and Brad Pitt (their last piece together was Se7en), in addition to the talents of Cate Blanchett and Tilda Swinton.

The story is adapted from the short story by F. Scott Fitzgerald (which I'll post up in the next week or so) which follows Benjamin Button, a man who's had a bizzare birth where he was born as an old man and ages backwards as time progresses.

It's such an intriguing premise as you start to wonder how things would be as you get younger and younger while those around you get older and older.

The early word from screenings seem to be mediocre, with a consistent complaint that the runtime is too long. Hopefully they will fix this for the official theatrical release. Check out the trailer (Youtube / Quicktime). 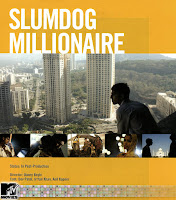 Danny Boyle's latest feature has garnered much attention for being a beautiful film and fairytale-like.

The movie was well received by the enthusiastic audience with its premiere at the Toronto International Film Festival. It well enough to win the People's Choice Award at the festival.

The film is about a young man named Jamal who is under interrogation by the police for cheating on India's version of Who Wants To Be a Millionaire, while being only one question away from winning the big prize. During the interrogation the detective says, even doctors and lawyers cannot come close to the 20 million rupee prize, and so Jamal, having grown up on the streets of Mumbai, cannot possibly know these answers. As Jamal tries to avoid arrest, he begins to explain to the police how he knew each of the answers. The story of his life maps out how he came to know the answers to each of the questions.

Regardless of what kinds of movies Boyle works on, one thing for certain is that he's able to craft stories that are intriguing and visceral. The visual style in the trailer seems breathtaking with using India as a backdrop.

I'm seeing the movie this week, so I'll have thoughts on it sometime near the end of the week. Until then, check out the trailer (Youtube / Quicktime).

By no means is this an Oscar contender, but still, it's one of the movies I'm dying to see this year. Early reviews has been lukewarm though that shouldn't be too surprising considering how high Casino Royale raised the bar. It opens this week, so not too much to say about it.

This is the 22nd Bond flick and Daniel Craig's second feature as the secret agent. I may be wrong about this, but I think this is the first Bond sequel to have integral continuity between the storylines of two movies.

I loved the raw edge of Casino Royale and I can only hope they brought it over into this movie.

The movie is directed by Marc Forster who has helmed the Kite Runner, Stranger than Fiction, and Finding Neverland, amongst others. Not really an action type guy, but at least those movies prevailed with storytelling.

Clarisse Teagen said…
These movies look to be promising and interesting. And I can't seem to find requiem for a dream in my country.
Still dying to watch it.

Beka said…
"The Curious Case of Benjamin Button" definitely would like to see that one!

The Lam said…
Thanks Clarisse and Bex, yah, hopefully Benjamin Button will be good. The trailer captivates me enough!